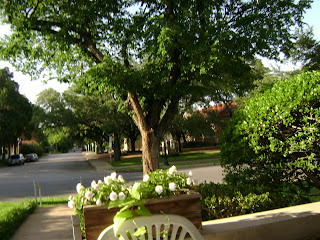 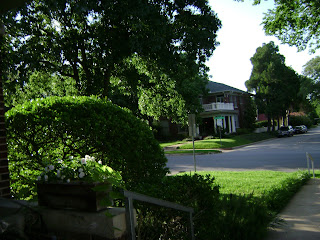 I often rave about the view from my front porch, because I find it soothing to sit out there at night, especially in the spring and early summer, and look at all the greenery around me. So here are a couple of shots of what I see (a couple of others didn't come out as scenic as they really are, but sometimes I feel like I'm in a park. Except in the hottest weather, there's a breeze, and it's just a wonderful place to be. I was in the doldrums today, so sitting out there helped. So did coming home from work and making a list of things I want to accomplish. Cleaning closets is on it, but it isn't likely to happen any time soon. One shelf in my closet is so overloaded with bags holding gift wrapping supplies that they keep falling on the floor and I trip over them. Oh, well.
Weight Watchers is only going so-so. I've changed so many habits and cut out so many things I usually eat that I can't believe I'm not perfect, but staying under 19 points is really hard for me (Jeannie gets 22 but she's taller than I am!). I've only lost 5.2 lbs. in 5 weeks, and I looked at my averages today and they don't look good. I almost never stay under the 19, and I use up a lot (but never all) of my bonus points. What are they there for? I could give up my evening wine, but as a friend said to me last night, "You have to have some pleasures left in life." And because I started in the doldrums today, I'm going to defiantly allow myself one small piece of chocolate. But, hey, I'm eating steamed squash without butter, spinach with lemon, tomatoes, and hearts of palm--all point free!
Tonight I've had an inspiration about moving some parts of the end of the current WIP (that's short for Work in Progress, thank you) and that's my project. And then I'm reading a really good novel by Julie Hzyz about a White House chef. I'll report on it as soon as I finish it.
Posted by judyalter at 5:35 PM

A pandemic learning lesson and a pleasant happy hour

We have all gotten into routines during this pandemic/quarantine that vary wildly from our usual daily routines. I’ve pretty much gotten used to my new routine and am okay with it, but today I had a funny wake-up call about how much my life has changed.

I haven’t worn make-up in five months. Why waste the makeup and the effort when I was going nowhere, wouldn’t see anyone but my family and a very few friends who, I hope, love me as I am. But today I had a doctor’s appointment—routine checkup, a little blood work, a look at my still-fat leg, nothing to worry about. But I decided to wear makeup because I think the better you look, the more it makes a subconscious impression on the doctor. If you look pale and wan, he’s going to think you’re poorly.

So I sat at my bathroom sink which doubles as a vanity—and I couldn’t remember what to do! I put on a light bit of liquid foundation and then scrambled in the drawer to find what was next. Powder! It turned out to be the dregs in a pressed powder compact. Do I have another? I still don’t know. I figured out blush, but then came to the part I think it important—eye makeup. My eyebrows have never darkened with age—they’re still the pale blonde they were when I was ten. Had I lost the technique for darkening them, so they were subtle, not obvious? Could I still do mascara without smudging it all over my eyes?

In the long run, I think I looked fairly respectable when I arrived at the doctor’s office. Certainly, he said I would survive such things s the apparent mosquito bite on my elbow and the arthritis in one of my fingers. And my leg is oh-so-gradually going back to normal. But I imagine it will be a while before I try the makeup thing again.

One doctor’s appointment messes up my now-established routine for the day, and I didn’t get much work done today. Mary came for happy hour, but it was just us two. Jordan has pulled a muscle in her back and does not sit comfortably; Prudence was busy with a final exam for an online graduate course she’s taking. But Mary and I had a pleasant, low-key visit.

She is one of those people who attract mosquitoes. While they rarely come near me, they swarm around her. It’s a concern these days not just for the discomfort of bites but because we’ve seen rising rates of West Nile virus in our county. So Mary arrives with all kinds of paraphernalia—a long-sleeved shirt, a face fan that drapes around her neck, bug spray (we have some but I think she likes hers better—ours is organic, at my insistence), and a lantern that is supposed to emit a vapor that drives the pesky critters way. She never got it to work quite right and fiddled with it a lot.

Meantime, Jordan had turned on our fan and the bug light which should discourage most flies and mosquitoes. It worked well for me, but poor Mary was constantly batting them away, particularly from her ankles. I told her I was grateful that she attracted them all so that they wouldn’t bother me. She wasn’t particularly amused.

Tomorrow I’ll get back to serious work, writing lessons for the online course on creating a chef. I think tomorrow’s topic will be “How ambitious is your chef?” and I’ll explore the career paths open to chefs. Which means I’ll spend a lot of time online researching. Not everyone can become Wolfgang Puck or Giada de Laurentiis or Jacques Pepin.

Now I’ll settle down with a book I’m to read for a competition. It’s about a rather grim subjects—can’t say more—but I have a feeling it is well done, which means I’ll have to read more of it than if I could dismiss it as sloppy and amateurish.

Today was pleasant, but the temperature is to go up all week. Bummer. Glad Is Isaias didn’t do more damage than it did, though several deaths are significant. And pray for the people of Beirut, where an explosion has killed at least seventy and injured many more. As someone I respect says, “There’s a world of hurt out there.”