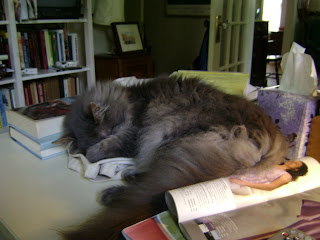 This is Wywy, sleeping on my desk. Usually when she's on my desk, she's in my face (often asking for food) or her tail is swishinh back and forth over my keyboard--makes working difficult. But this afternoon, she was sound asleep, didn't budge when I took the picture. Wywy, now 18 and in good health, is a mis-named cat. Jamie found her as a kitten on a rural road in Minnestoa where someone had put her out to die. He brought her home and kept letting her roam free (I'm a big believer in indoor cats because they have such a much longer life span). I kept telling him not to let her out because she'd get pregnant. When he finally got together the money to take her to the vet, I said, "I don't know why she hasn't gotten pregnant." The vet, by then an old friend (we'd had a lot of animals while the kids grew up and Jamie was then in his early 20s), said, "I can tell you why." Okay, it's hard to tell the gender of cats, but Jamie was embarrassed and said, "Mom, this story never leaves this room." Of course, since, he's laughed about it. But by then we were in the habit of referring to Wywy as "she." When I say "he," Jordan says, "You know how I hate when you do that." Sometimes I refer to her as "She, He, It." When Jamie left home I told him he could go but he couldn't take the cat--she's mine. She is the most affectionate cat I've ever known (never mind that once, enraged at another cat, she bit me when I foolishly picked her up--a bad bite requiring ER trips). She loves on everyone who comes to the house and has particular favorites and particular fans. After some research, I am pretty sure she is part Maine Coon, and they have a reputation for gentleness and affection.
I'm back to watching Weight Watcher points big time, having realized that last week I exceeded my daily points every day but one, although I didn't use up all my bonus points--just a good bunch of them. (I think maybe there's a misleading safety cushion in those points.) Charles is fond of Susan and Melinda in my office, and they think he's wonderful, so today we met him at his favorite restaurant, The Black-Eyed Pea, for veggie plates. The waitresses all know him, and when I saw we were going to be late, I called and asked if Charlie was there. They quickly said yes and told him we were on the way. He was in fine fettle and we had a great time. I refrained from squash casserole--that stuff really costs a lot of points--but had carrots, green beans, black-eyed peas, and mashed potatoes without gravy. Did a trick I learned from Melanie, the southern belle in the family, and put the peas on the mashed potatoes. So good. But my appetite must be shrinking--I couldn't eat it all. Tonight I grilled a quarter lb. of salmon in my Foreman Grill (a wonderful invention though I rarely use it for anything but salmon) and had steamed fresh spinach with lemon. Delicious--and I had enough points left over for a bit of chocolate.
So tonight it's on to write a bit more on the novel and go back to reading my Libbie Custer novel--the difference in voice is still amazing to me.
Posted by judyalter at 5:46 PM