And a good new year to all 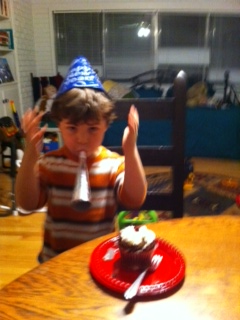 Jacob welcomes in the new year--quite a bit before midnight. We celebrated with a hat, horns, and a Black Forest cupcake apiece. Two-year-old Abby from next door came to play, and her parents and I ate hummus and crackers while the children played. Finally I fixed everyone hot dogs in crescent rolls and then they took a sobbing Abby home--she wanted to stay and play! Now Jacob is up way too late watching the New Year's TV in my office. We're both ready for bed soon but  may make it to 11:00 when the Times Square ball will fall.
And tomorrow--oh, my--the parade and the big game with TCU paying Wisconsin. Last prediction I heard was that we won't win but I think it's pretty special just to be at the Rose Bowl. Seems like half my friends are in Pasadena right now. I've wondered about those who drove with the blizzards in Arizona and the rain in southern California.
Several people have suggestd to me that 2011 will be so much better than 2010--and maybe it will. The stock market closed higher, and the predictions are for the economy to recover. I have too many friends who have suffered the loss or severe illness of a loved one in the past year. If you've had problems in 2010, be they economic, career related, illiness of yourself or loved ones, I do sincerely hope 2011 brings you new times. But I have to say, selfishly and personally, 2010 wasn't all that bad. I finally settled in to retirement and decided I love it; I spent more time than usual at family gatherings, always a blessing; I think I made real progress on several writing projects. So if like me you've had a good 2010, I hope 2011 blesses you with even more of the good you've enjoyed. My thoughts and prayers will be with each and every one for a wonderful year of love, happiness, and accomplishment.
Oh yeah, there's tomorrow. Ham, black-eyed peas, and de-Christmasing the house in addition to that football game. LIfe never seems to get dull.  Now if I can just gt Jacob to admit he's sleepy . . . .
Posted by judyalter at 8:40 PM