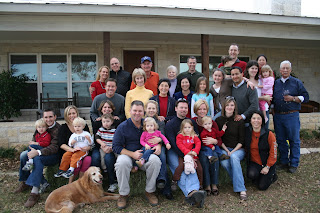 It's a little after the fact but today I received the disc with the photos of our Thanksgiving. Patty, my sister-in-law's sister, is our official family photographer, and she took 194 photos that day! I'm just attaching the one of all of us in front of the house. Sorry but I can't begin to figure out how to tell who is who, but my brother is the blue-jeaned one at the far right. Hmm--the pictures looks bit-mapped but you get the idea. It was a happy day. John twitted me for saying we're all loosely related, but that's the truth of it. Everyone there is related to someone else there but for some of us it's a distant relationship. Still it was a happy, congenial crowd. I was particularly glad to get to know Carlton's parents--he's married to my niece Jenn. And it was good to see my former sister-in-law and her new husband.
Last night I was down in the dumps, no energy, no nothing. Picked up a mystery that was too cozy, even for me. Then I picked up a Catherine Coulter novel, Tail Spin, that Mary Lu had loaned me. Coulter's books, billed as "FBI Thrillers" are anything but cozy. But she's a terrific storyteller, and makes you overlook coincidence--there really is at least one--and the fact that the two main characters are obviously headed for romance. Yes, there's violence, but the good guys win, and this one had me reading far into the night.
This morning I had that "I'm not sick but I sure don't feel good" feeling--coughing, blowing, lethargic--but it's always been my theory that if you get up and get going you'll feel better. It took till mid-morning, but then I was fine. Had lunch with my boss and a consultant and hope I held up my end of the conversation with some intelligence.
Tonight I've made one dip for Saturday--a start--and narrowed the menu since lots of people have called with regrets. I do hope there will be someone here! Bought wine today, and by luck Jim, the man who does my yard, was here. He carried it in for me, saving me endless trips with two bottles at a time.
Thought I would run to the grocery first thing tomorrow--but oops! I have an 8:30 meeting with my boss! Guess the grocery run is postponed.
Now I have to get back to Catherine Coulter! If you haven't read any of her books, I recommend them--and they're not for women only (for some reason, I'm thinking of John as I say that!). My trouble is that I've read several of her books and never know when I'm going to buy one I've already read. I wish I were very organized about keeping a database of the mysteries I read!
Posted by judyalter at 5:38 PM