A gift from a fan 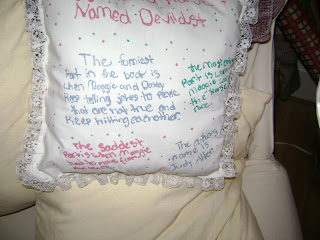 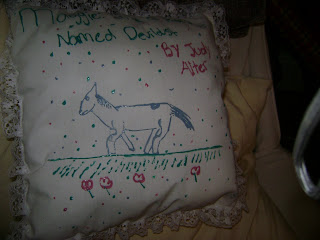 I had a wonderful suprise today (sorry, don't know how to fix that strange layout). I was working from home when the postman came, about eleven, with a package from a high school friend--actually she is the older sister of my best friend, and I spent many days and nights at their house, the one that is less than two blocks from the current Obama residence. The package contained this pillow, which Liz's granddaughter had made and her daughter-in-law wanted me to have it. I don't know Sue's age, the granddaughter, but she had apparently read my middle-school novel, Maggie and a Horse Named Devildust. The front of the pillow, as you can see, has the title and a picture; the back has comments about the funniest part, the saddest part, etc. It's a thrill to know youngsters are still reading that book, which was published in the 1980s. There's a funny story behind it--my agent asked if I could do a novel about a young girl who wanted to be a cowgirl, but her mother wanted her to be a lady: he had a publisher who asked for such a book. I wrote it, sent it, and it was returned with a rejection that said, "Frankly, we find Ms. Alter's writing pedestrian." Oh well, as one of our authors found out yesterday, you don't always get good reviews.
Our book, Literary Dallas, edited by my good friend Fran Vick, got a "mixed" review in the Dallas paper. Fran saw it as purely negative, bit it really wasn't. It did have an unfortunate headline, "Big Diss," but in spite of that I think it will sell the book, and the folks at A&M agree. But when a reviewer doesn't love your work, it's kind of like someone not thinking your grandchild isn't as beautiful as you do. But it's part of the writing world, and you have to stand up and take your licks. I've heard funny and horrifying stories about authors who complained about negative books.
One of my pet peeves is to wait for that repairman who's due between 8 and 10 and he hasn't come by noon. Today I was still "taking care of myself," getting rid of this tiny cold, so I called and cancelled the AT&T installation--I wanted a nap. It was a semi-lazy day; I dealt with business matters most of the morning, via email, but found time this afternoon to lay out dishes for my Saturday night tree trimming party. Ever since I've been entertaining, I've put out dishes way in advance, each with a slip of paper telling what goes into the dish. I look at my menu, make the slips, and choose the bowls, etc. accordingly. Jordan now does the same thing, and one night, when she was preparing her first Thanksgiving dinner, she had the table all set days before. Christian commented, "You and your mother have a screw loose."
After two and a half days at home, feeling sorry for myself because I was sniffling and coughing, I'm ready to get back into the world tomorrow. and believe me, I have a lot to do out there in the world. Today I did my yoga routine for the first time in almost a week. Felt good, and I did better than I expected.
Posted by judyalter at 3:20 PM