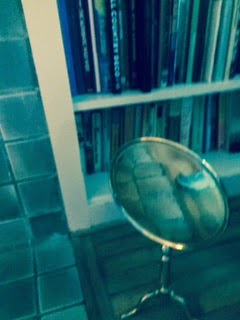 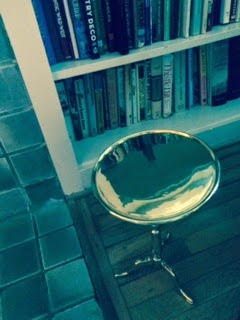 I'm a Scot and proud of it, an enrolled member of Clan McBean (only my father spelled it MacBain). Today I brought home a piece of Scotland that I'd taken to a metal shop to have polished. I'm not sure what to call it--I think my parents called it a trivet--but it's a solid brass small stand. I think it was meant for holding your mulled cider in a heavy glass mug as you sat by the fire and, when not in use, tilted upward. You can't see it in the picture, but the MacBain Clan Crest is in the center--Touch Not the Cat Bot a Targe (Touch not the cat without a glove, or beware of messing with the MacBains). I've had this whatever-it-is for years, getting more tarnished by the year. When Jordan and I rearranged the living room, I decided it should sit by the fireplace in the living room and took it to be polished. They put protective lacquer on it, which is the reason, I think, that the crest is hard to see. 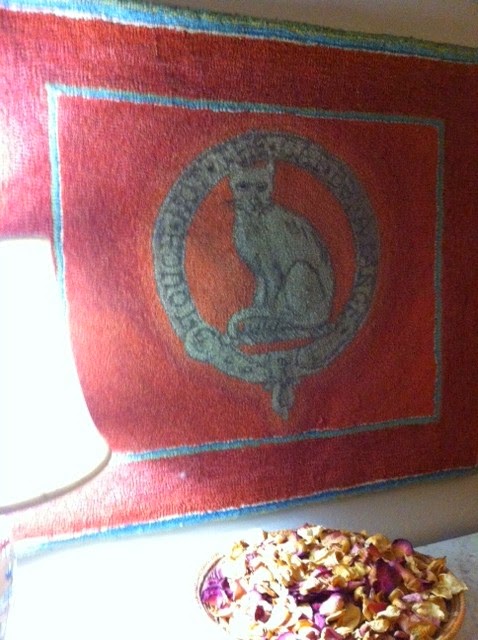 The crest shows plainly, however, on a hooked wall hanging that my mother did when she and Dad lived in North Carolina. Hooking, the old fashioned way with a punch needle, was one of the things she took up in retirement. One of the prizes in my house is a quilt made by my oldest son, Colin, who ordered the MacBain plaid fabric and a gold crest from Scotland, and his wife who did all the tedious work of quilting. I proudly hang it in my living room, amidst the mostly southwestern/territorial theme of my house. It's hard to see the plaid in the picture, so there's a close-up of it. (I'm getting more pictures than text.) 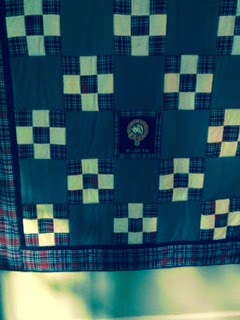 One more picture if I can figure out how to fit it in. It's a drawing portraying Gillies McBean at the Battle of Culloden when Bonnie Prince Charles and his Highlanders were soundly defeated (slaughtered is a better word) by the English who had rifles--they had only their claymores. Gillies, however, was a hero/martyr and reportedly slew fourteen men before he was killed. An apocryphal quote from the British general in charge (his name escapes me) is that he wished his men hadn't killed that brave man. The print hangs in my bedroom. Scotland the Brave--forever! 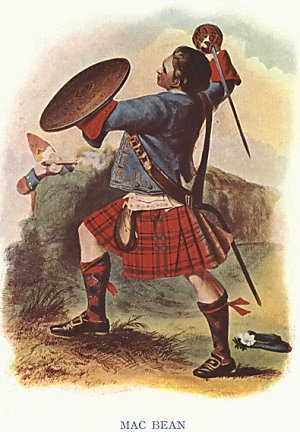 Posted by judyalter at 6:24 PM