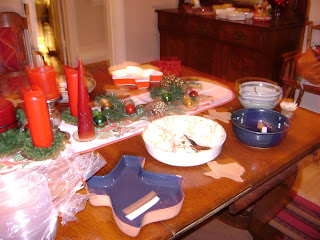 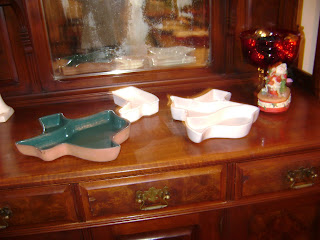 These are the table settings for my tree trim party tomorrow. The one with three dishes is the dessert buffet; the other is the table. I have a friend who gives me everything Texas-themed she finds at garage sales (she's a devotee) and over the years my collection has grown, so this year I decided to do a Texas theme for the party. Note the cork coasters decorating the big table. That particular friend is off welcoming her first grandchild, so she'll have to do with pictures.

When I was a kid, tree-trimming was not festive. We all went to buy the tree; my father and my brother put it up and put the lights on, and then it was up to Mom and me. They left. I always thought it should be more festive. My ex-husband, Joel, and I probably had our first Tree Trimming Party in 1965. We were new in Fort Worth, didn't have many friends, and wanted to celebrate. As I remember it was a sort of bare bones party. My brother and his family came for Christmas, but I don't think they were here for the party. We had some sort of party every year after that, and I remember making people string cranberries and popcorn--if you've never strung popcorn, it's really frustrating. But it's a cheap way to decorate and keep people busy. By the early 1970s we were in the lovely big Mediterranean house that I later called "my doctor's wife house" and the party became huge. I remember one year when the older physicians asked where the whiskey was (we hadn't planned on serving it) and younger ones went out before midnight for more beer. For many years, we had huge parties--60 or 70 people, and I did most if not all the cooking. I had some stand-by favorite recipes--a couple of caviar spreads that I alternated, always my mom's cheese ball, a chili cheese dip that everyone loved, sausage balls. Some years we experimented--once an entirely New Meixco themed menu, another year a dessert party that was catered--the caterer took some chocolate mousse back to the children and said, "Look, kids, chocolate pudding." They tasted it and looked at him disdainfully: "This isn't pudding; it's mousse." My young sophisticates.
There were a couple of years we didn't have the party--one when our house was being disastrously remodeled and we were at my mom's for Christmas, another when the marriage was coming apart and Joel insisted we couldn't afford it. After he left, I had the party as always, and some said how funny it was that everything went on just as it had when he was there. I was reminded of the Buddhist belief that we are but waves on the ocean and when we disappear our wave sinks back into the ocean. A couple of years later a friend came and said she realized she didn't know many people--I had, as a single mom, branched out and made lots of new friends.
In the early years, the children were usually in their pajamas and made a brief appearance. I  remember one year they slept through the entire party. But I never thought of it as a kids party, and I was astounded one year when friends brought their grown son. This year there will be a lot of children--good thing I have a large playroom. Jacob will be here, his cousin Edie, friends' grandsons, another friends two foster children, new to me, one of Jordan's friends with her daughter, my nephew's family with two children and my niece with one. I'm suddenly retooling and thinking in terms of kid food. Maybe a trail mix thing (we always have that around for Jacob) and the old standby--onion soup dip and potato chips.
I've made chili cheese dip, sausage balls, bourbon hot dogs, a ham terrine, cheese ball, desserts (plus persimmon bread from Jeannie) and tomorrow I'll make a salmon dip. This year, no caviar, no brie--I'm on a budget. Jamie said if I didn't have artichoke/caviar dip he isn't coming, but he will. As I often do I announced in early October that I wasn't going to do the party--didn't have the energy, the money, etc. Whine, whine. Several friends said, "We don't care what we eat. That's the only time we see a lot of people." So now I'm enthusiastic about it again. I called it on the invitation (first e-mail invitation I've ever sent) a Recession/Retirement/Belt Tightening No-Tree Tree Trimming Party. Oh, yes, that's another part--in recent years it's become the almost-annual no-tree party, because I don't put up a tree--I'm never here at Christmas. I think I got burned the year the tree fell over in the middle of the party and good friend Dick Hoban caught it. The house is festively decorated, but when Jacob asked if I had a tree, I had to say "No." It's a pity, because over the years friends brought me a wonderful collection of unusual ornaments, all with sentimental value. They are carefully packed away in the attic.
Here's a quick recipe that everyone seems to love--the dish is usually empty at the end of the evening:
Make a sauce of 2 cups ketchup, 3/4 cup bourbon, 1/2 cup brown sugar. Cut 2 lbs. hot dogs into half-inch chunks and simmer in the sauce one hour. (I added an extra half pound of hot dogs this year!) Enjoy!
Posted by judyalter at 6:18 PM