Yoga and a nice day 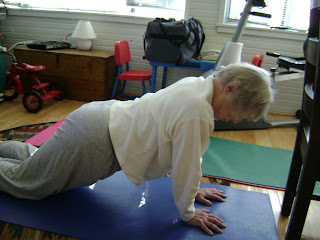 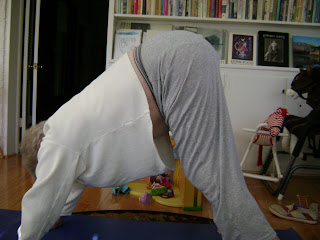 This is me at my yoga lesson this morning--not my best pictures. In fact, I left one off because I said it made me look so fat, and Elizabeth said, "But look how straight your leg is"--it's a pose where you get on hands and knees, extend one arm and the opposite leg, and it's one that I am really proud that I can do for a long slow count of ten. For those who don't do yoga (and there aren't many these days), the one on the left is a kneeling plank, and on the right, a down dog. I don't look nearly as good as I imagine myself while I'm doing these poses. And truth to tell, I had a poor yoga session today, though Elizabeth kept telling me that it was so much better than I was when I began. But I felt shaky during the whole thing, could feel my muscles twitching. I am never content, as she advises, to just say, "Okay, it's a bad day." I have to look for reasons, though I could find none. By the time Elizabeth got here a little after eleven, I had been to two groceries and the nursery to buy cyclamen for my flower boxes for winter. Really felt good, so I don't know why I was so twitchy.
Winter came to Fort Worth today--the temperature probably wasn't all that cold, but the wind was fierce and I was chilled to the bone when I got home this morning. Too cold to plant those cyclamen. I wore an insulated vest--another reminder of Scotland, for I had bought it for that trip.
A pleasant day. After my morning of errands and yoga, I had lunch, read emails and blogs, and had a lovely long nap. Jordan and Jacob arrived about 4:30, and a friend of hers shortly thereafter. I had fixed stuffed mushrooms, a recipe I remember from my mom, and then we made a salad, I steamed broccoli, and roasted some salmon and put pesto on it. All to fit Jordan's South Beach diet, which Addie, her friend, is apparently on too. Jacob ate lots--his first time to try salmon but he liked it. Liked the cheese-stuffing in the mushrooms but the first bite his mom gave him was way too hot.
So now I'm tucked in for the night, listening to the wind outside and thinking I need a sweatshirt. My evening project is to work on the cookbook, but I've recharged my Kindle and think I'll see what's on it that I haven't read.
Posted by judyalter at 5:54 PM