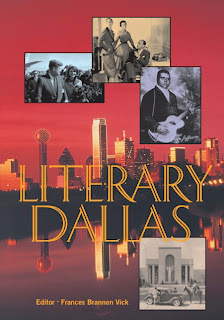 Tonight was the launch autograph party for Literary Dallas, edited by my good friend Fran Vick.Fran hunted all over Dallas for a suitable venue and finally decided to have it in the Garden Room/Pool Area of the condo building where she lives. She cooked, her kids cooked, her son served as bartender, and her daughter as greeter. As with most events, the Vicks made it a family affair. Many of the contributors were there, also signing books, though it got to be chaos--we couldn't keep them in their seats, and a few books disappeared mysterously. I sold one old friend a book, he set it down to talk to somebody, and it was gone--I always thought literary people were so honest. And you could tell by the look of the people that this was a literary crowd. I saw old and good friends, met people whose names I know but have never met before, got hugs from the Vick adult children. It was hectic but fun--and good food and wine. Melinda and I pretty much spent the evening at the sales table but that way we got to see everyone.
And today I got edited copy of my memoir/cookbook, so I have a great project for the weekend--going through and either accepting or denying the editor's changes. I'm easy. I pretty mucy accept. Like my book of short stories, I'm really excited about this one. The editor, who also happens to be a friend, called the other day and said he thought it was a really good little book. He also said nice things about TCU Press, such as we are the one doing the best with Texas material! Music to my ears.
This has been the week that was--and I've been a vanishing person in the office. Monday--out of the office all day for the AT&T installation, Tuesday gone a chunk of the morning for the ophthamologist, in the office briefly, then a late lunch meeeting and dinner out, Wednesday--a blissfully calm day though an early lunch date, today in the office early in the morning, but home early to sneak in a nap before the trek to Dallas and the party. And tomorrow--late because of an early haircut appt. and leaving early for the church bazaar, lunch with friends, and then dinner with an out-of-town friend. I love my flexible schedule, but this has been too much. And I' a tad tired. But energized by the cookbook. Glad my life is not boring.
Posted by judyalter at 7:34 PM