An Award Turns Into An Adventure 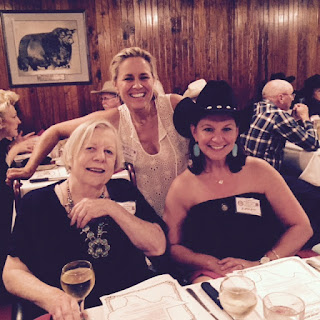 Last night my daughters and I set off with an Uber driver for the Will Rogers Medallion Award Banquet at the iconic Cattlemen’s Restaurant in the Stockyards District. Helping me in and out of an SUV these days is a bit problematic but I have found Uber drivers almost always helpful and cheerful. We arrived safely and my chair and I rode a small platform the six steps up to the main level—only to be told that event was down a set of about 20 stairs. The manager assured me he had strong staff who could carry me safely down the stairs. I hesitated. The girls said, “Think of it as an adventure, Mom.”


Let the adventure begin! And it wasn’t nearly as unsettling as I expected. The four young men kept my chair almost upright and they moved in concert with steady assurance. I felt like Cleopatra or some other ancient queen. Perhaps I should  have waved my hand in benign blessing to the crowd below.


Downstairs we found a few good friends and acquaintances, wine, and dinner seats in that order. Then we waited for dinner …and waited…and chatted and laughed …and waited. A pleasant couple from Arizona across the table chatted. Then one of the largest men I’ve ever seen slid (sort of) into the chair next to Jordan and his equally large wife fitted herself in on the other side. (We guesstimate he was 400 llb.) Fighting off hysterical laughter, Megan came around and   moved me a few inches the other way, giving Jordan a bit more space. But periodically I asked Jordan why she was hovering over me, and we all laughed. I was not amused however that the gentleman (?) never apologized, asked Jordan if she was all right or in any other way acknowledged that his size caused a problem for others.


Dinner arrived and I ran smack into my new dining restrictions. Green beans oozed butter Megan reported the dinner rolls were already glazed with butter, and I voted against olive oil as a substitute for sour cream on my potato, I will have to do some solid research on dairy substitutes. By the time it came to a really nice-looking filet, done just the way I like it, I was through. 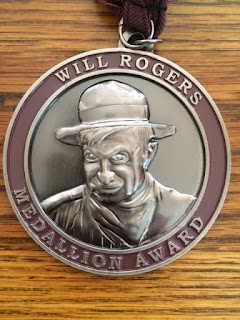 The awards presentation went smoothly. Charles Williams, the man in charge of the whole event, was knowledgeable and precise, saying just enough about each entrant without inviting them to respond and thereby drawing out the evening. At intermission we thanked him and fled homeward, but I brought with me a lovely bit of recognition: the silver medallion in the cookbook class for Texas Is Chili Country. 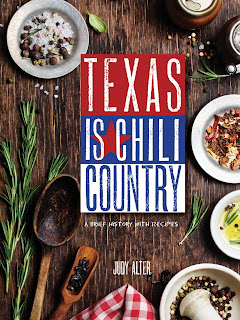 Posted by judyalter at 2:35 PM

Wonderful story with a happy ending. Truly an adventure.