The Joy of a Big Family 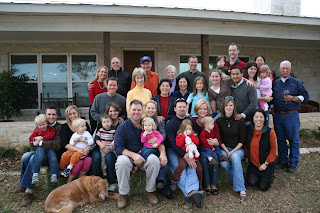 I grew up almost an only child. My brother, six-and-a-half years older,, was sent to boarding school when he was about fifteen and never really lived at home again. I don't remember being lonely because I had lots of friends--two "best" friends. But I never knew about sibling love and bonding. When I married, I expected to have the usual two children and that was it. Instead I have four wonderful children, all with equally wonderful spouses, and seven grandchildren. We are, as Colin (my oldest) said this weekend, a noisy bunch when we get together. It used to sort of intimidate some of the spouses, each of whom came from two-children parents but now they happily join in the fun and noise-making and even instigate it. And I am amazed at the bond between them--and they way they love all the children, not just their own. Love, I've decided, is infectious.
Today we all ate lunch at Babe's Chicken--a belated celebration of my birthday, the destination chosen because I have long wanted to eat there. Christian arrived first and got us a private room, round, which was wonderful. I sat there in awe and looked around the table at those happy, laughing faces--well a couple of grandchildren were over-tired and half-sick but that's to be expected--and thought, "This is my family!" I am so grateful.
And then there is my brother's family--when the kids were in high school, we all ate Sunday dinner together: my four, his son and daughter, and whatever assorted friends wanted to join us. I often fixed for 15-20 on a Sunday night. These days, John and Cindy have two in-law children and four, almost five, grandchildren. They kids are still close, though they don't see each other often--when they do, it's a happy reunion. And John and I talk frequently on the phone.
And then there's Cindy's family--two sisters and their significant others and their mother. We mostly see them once a year, at Thanksgiving, but they too are family, and we are all extremely fond of them.
Above is a picture of most of us taken Thanksgiving 2008 at my brother's ranch--that's him standing to the far right. I won't even attempt to tell who is there, who is missing, who was invited that day--just say it was typical of our Thanksgivings.
This weekend the whole extended family met at a wedding celebration/going away party for one of Cindy's sisters, Jenny, and her new husband, Kevin. They've been together something like 18 years but got married when he got the news he's deploying to Afghanistan next week. Granted, there's a worry behind that--he's the first person I've known and cared about to deploy to "our" wars in the Middle East. But last night was like a big family reunion, although there were many other people at the party. Kevin said it looked like Thanksgiving all over again, and at one point he, Jenny, Megan, Colin and I got to laughing over a particularly memorable holiday--though it wasn't funny at the time. I got to see my newest great-nephew, now seven weeks old. It was absolutely a wonderful evening. And I thought again of the joys of a big family.
My diet went all to pieces this weekend--no thought about calories or points or gluten or any of it. For dinner last night I had two helpings of potato salad (made according to the recipe from County Line BBQ in Austin and nicely flaviored with pickle juice) and, much later, a small piece of Jamie's home-made banana pudding. And today, at Babe's--well, let's not even talk about it. I haven't eaten fried chicken in years, and this was wonderful. I said another time, with will power, I might follow the example of my vegetarian granddaughter, Eden, and eat only veggies, but Jamie pointed out those--potatoes with cream gravy, corn, and green beans--are so heavy with butter I wouldn't be saving anything.
Thanks to Jamie and Mel for hosting all of us at their house in Frisco, finding corners and nooks for everyone to sleep, and organizing a great weekend. And special thanks to Maddie for giving me her bedroom. More pictures will follow as Jordan sends them to me from her camera.
I now know what I missed growing up, and I can't imagine life without a big family. I am so blessed.
Posted by judyalter at 5:51 PM