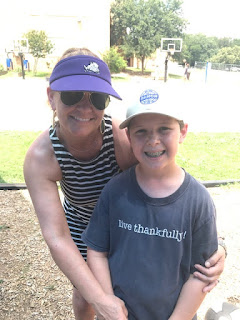 I think we all have a tendency on a child’s birthday to think back on the life, however short, calling up those golden memories. Today I remembered the first time in the hospital when I held Jacob. And the way we used to put him, in his Bumbo or whatever that early seat was, in the middle of the dining table as a centerpiece. He was always so happy, it made for happy dinner hours.


He walked early but didn’t talk for a while. Not that he didn’t have anything to say. He spoke volumes in gibberish. I used to talk back to him as though we were carrying on a conversation. His Aunt Betty thought it was hysterical when we’d go to dinner because Jacob got all the inflections of conversation right, just not the words. In Houston once, a distant cousin asked me seriously if Jacob spoke Chinese. Of course, the day came when we couldn’t shut him up.


The nights he slept on his bed in the family room, got scared, and came to sleep with me. Or the night, when he was about three, when he crawled into my bed and said, “My bed is wet.” Eventually he gave up his bed and slept with me. These days he wouldn’t dream of sleeping with me, and I miss that closeness.


There was the time he made up a tune and sang to me, “I’m uphappy today.” He broke the chorus with, “Juju made a booboo.” I had gotten hummus on something I shouldn’t have, and he thought it was so funny he worked it into his song. I still treasure the video, a selfie he did.


He and I shared many happy days—a New Year’s Eve when we toasted in the coming year with kid wine. Jordan worried that I’d post the picture, and people would think I’d given him wine. The nights when he used to think it was fun to go to dinner with Betty and me. Now he thinks we’re boring.


He came out to the cottage this this morning to open his gift—a new grip for his putter—and asked plaintively if we’d have family supper tonight. We did—but we three adults were at the dining table, and he and his overnight guest ate in the family room. Such togetherness. A childhood friend is spending the night, a girl a head taller than he is. She couldn’t go to the swimming party today because it was all boys. Right now, they’re giggling on my couch, fishing for something they’ve apparently dropped, and I’m suspicious.


Jordan had a trying day—16 boys playing basketball and then swimming. I meantime had a peaceful day working in the cottage and by evening was craving company. And so the day ends. Happy birthday, Jacob. 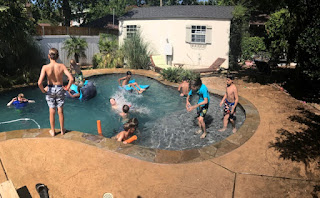 Posted by judyalter at 8:09 PM