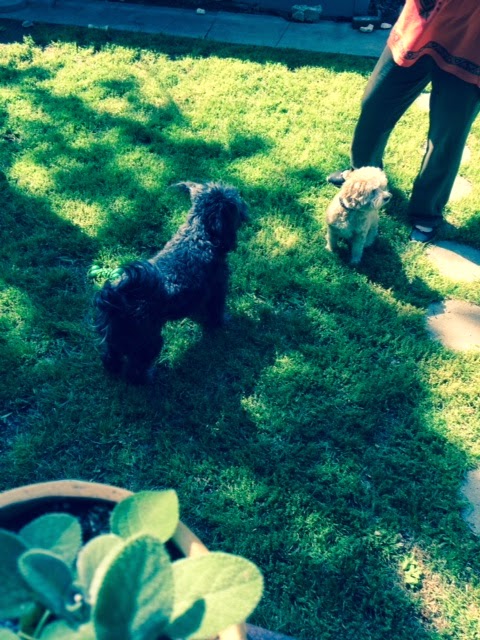 My kids never had play dates, but I don't think I was a neglectful mother. We'd just never heard of the concept back in the seventies. Besides, with four kids, they had plenty of action at home. I remember once when the mother of an only child called me and wanted to know if Megan was available to play a week from Thursday. I nearly exploded! How in the blue blazes did I know what Megan would be doing that far away, but I assumed she'd be playing with her brothers and sisters. (That's another thing--I don't remember elementary school having so much homework; Jacob and I spend much of the afternoon doing homework--either I've forgotten or I really didn't do that much with my children.)
At any rate, we had a play date around here yesterday. My friend Jeannie brought Mabel, a two-plus-year old cockapoo to play with Sophie, my almost three-year-old bordoodle.
Mabel is staying with Jeannie, and I do believe she thinks she's died and gone to heaven. All she wants is to sit on a lap and be loved--but she would prefer it to be Jeannie's lap. We thought a play date between the two would be perfect.
It was and wasn't. Sophie thinks all comers, be they dog or human, love her and have arrived for her delight. Mabel hasn't been around that many other dogs or people, so she's hesitant and protective with a tendency to be belligerent. If Sophie came too close to Jeannie, Mabel took out after her. Sophie, who can run faster, simply circled the yard, thinking it all a good game. Sometimes they'd calm down and sniff each other, but there was never any real play.
While we ate lunch, we'd find them lying together under the table but then something would set one off and they'd be at it again. We had fun, but we're not sure about the dogs. I guess though it's like children--you have to give it more than one try.
It's a little hard to see Sophie in the shade, but she's there. I never realized before Sophie how hard it is to photograph a black dog.
So this is what my retirement has come to--second-grade homework and play dates for dogs.
Posted by judyalter at 3:39 PM