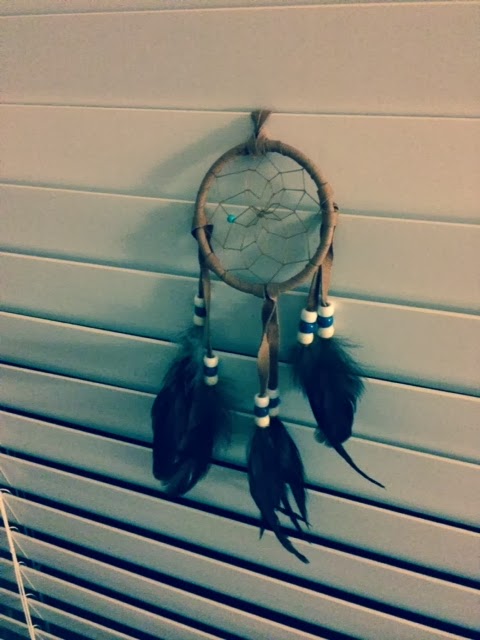 I bought a dream catcher in Santa Fe, a small one because they were cheaper and because I thought a larger one might be too showy (actually I bought it in Chimayo, which is a great place for magical beliefs because of the healing dirt found in its sanctuary). For those who don't know, a dream catcher is a leather-bound circle, with a web in the middle and a central open space. Feathers and beads hang from the outside circle. Clearly a reproduction of a plains Indian artifact.
I thought it would catch my creative dreams and save them for my writing. After all, the other night I dreamt the opening of the sixth Kelly O'Connell novel--it's just that it wasn't really a dream. I was only half asleep and I was recalling actual events.
I figured dream catchers were kind of trendy because my daughter-in-law said my oldest granddaughter had one for a while. What? She got rid of it? I may have to discuss that with her, but my list of things to talk to her about grows. For instance, she didn't like To Kill a Mockingbird. To me, that's unpatriotic or something.
Today I read the tag on the dream catcher--it catches bad dreams in its web and holds them, while good dreams escape through the hole in the middle--wait! the good dreams are the ones I wanted to hold on to. Anyway the legend goes that with daylight the sunshine disintegrates the bad dreams, which is all to the good. I'm a heavy dreamer, sometimes dark, and I almost always remember my dreams, though I may forget them shortly after I wake. On the other hand, some stay with me for a long time. Once I came to the office and reported one to Melissa, my colleague, who has ever after said to me, "I hated being peed on by that possum." It's true--it was in my dream. I think we had discovered a family of possums in the building's courtyard the day before.
Anyway, today I hung the dream catcher in the window. Jacob looked at it and demanded, "What is that?" When I told him, he walked over to examine it and then said, "You don't really believe that do you, Juju?"
"Yes, I sort of do."
"It doesn't make sense. It's not true." Ah, a practical child of the 21st century. I refrained from reminding him that he still believes in elves at Christmas...and Santa too!
"Well, is it okay if I kind of believe it? I'd like to."
"I guess so," he said with a sigh as he walked away. I continue to have faith. Jacob sometimes thinks his grandmother is crazy.
Posted by judyalter at 6:47 PM