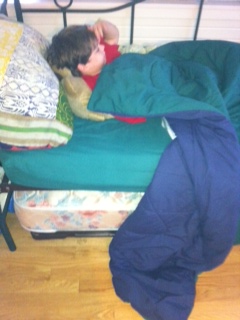 The Impetigo Kid
Jacob is pitiful tonight. I had promised him an evening he was looking forward to--playing with his pal Abby, spaghetti for supper, ice cream for dessert. But when I picked him up from day care they pointed out a lot of small red bumps and suggested impetigo--they've had one case at the facility and have a health alert warning sign up. The suggestion: get him checked out. Of course I called Abby's mother, and as I expected, she bowed out gracefully, saying she particularly worried about her 18-month-old. Jacob is heartbroken--suggested she get a sitter for the tiny one and bring Abby, but I explained if Abby caught it she'd give it to her brother. "What if you get it?" "What if  Mommy got it?" He sobbed, grew quiet, and next thing I knew he was asleep in front of the TV. Our spaghetti didn't taste nearly as good, though he's eating ice cream with enthusiasm. Tomorrow morning we go to the doctor. I'm sure his Aunt Betty won't cancel tomorrow night so that's one bright spot. I feel so sorry for him--and when he says, "It's not fair," I agree with him. Told him I'd spoil him tonight, let him eat ice cream and watch late-night (for him) TV.
But it's hard to see a six-year-old boy put on his nightshirt (one of his father's T-shirts) and put himself in bed at seven o'clock. That's what he did, and he's watching TV.
Posted by judyalter at 5:58 PM