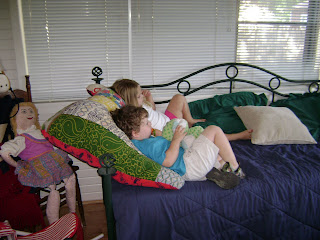 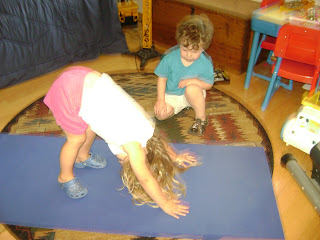 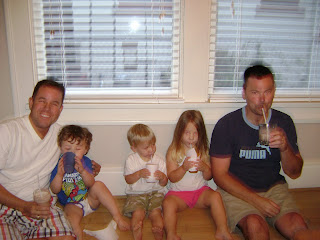 No post last night because I had half my family here for supper--here's what happy kids look like drinking milkshakes that Uncle Colin (on the right, with Uncle Christian on the left) made, trying out my yoga mat, and snuggling to watch TV. They are all so adorable together and so close in age that they have a great time. They run through the house screaming and yelling but there is little if any fighting. Since we just saw Kegan, the youngest, last weekend, he was quicker to warm up to Jordan and me and we got hugs, kisses, and a chance to hold him on our laps.
We had a Greek meal--flank steak seasoned with Cavender's, hummus and pita chips, Greek salad, cucumber sauce, and dolma--but half the Greek side of the family didn't get here until ten o'clock, by which time others had either gone home or to bed. Jamie and Maddie snacked on dolmas dipped in hummus. I had "doctored" the hummus with a little bit of oregano, lots of lemon juice, and a tad of olive oil. Makes it, as Lisa said, addictive.
Today my horoscope said to do whatever I wanted to with loved ones, so I didn't worry about straightening the house or any of those things--okay, I did empty the dishwasher, put away last nights bigger things from the drying rack, and make my bed. But by 9:30 we were all headed to Jordan's house. It was such a wonderful morning, I drove with the top down and loved it. The children were all playing so happily, if noisily inside--joined now by Megan and Brandon's two, Sawyer and Ford, that we never went outside. Melanie and Edie also arrived a little after ten. Jamie had gotten up early to put pork loins in the oven, and that, along with a cole slaw based on the idea of the slaw from Austin's Salt Lick, was a delicious lunch. He seasoned two pork loins heavily with salt, pepper and garlic powder, and roasted them slowly all morning. Then, at serving, he shredded the meat and put barbecause sauce on most of it--some really hot habernero, some medium hot, and left some plain. I ate the plain and loved it. Megan complained that I had tricked her because the recipe I found online wasn't exactly Salt Lick's--it was someone's approximation, but it was delicious. She likes it because it has no mayonnaise.
Aftre lunch at least two kiddoes were headed for naps, and I came home for a nap and some computer, desk, quiet time. Tonight we will go out to dinner and no doubt end up back here to sit on the porch. The little kids love to ride the concrete lions in front of Jay and Susan's house, and all of a sudden the weather is so pleasant that it's nice to sit out at night. I think as part of retirement, I've learned to relax and enjoy my family more--and I did that today.
Posted by judyalter at 12:17 PM