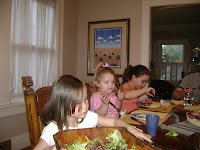 You know people who party too hard on weekend and have a headache (read hangover) on Monday? Well, I have a limp on Mondays. I had noticed in the past that my right foot was occasionally really painful to walk on, but a little clinical observation has proved to me that it's always on Mondays after I've had a cooking weekend. This morning, after fixing two large dinners over the weekend, plus tending to a houseful of kids and grandkids, I could barely walk on that foot--and truth to tell, I felt achy and bruised all over. By mid-day I felt better, and by tonight I'm back to normal. But that soreness and limp are things about aging that I don't like to confront.
As a result, it was a quiet day. I came home a little before noon and did all kinds of household chores--laundry, emptied the dishwasher, put away dishes from dinner last night, etc. And took a long nap. Tonight I had dinner with good friends at a lovely small Italian restaurant, relaxing and fun, though I meant to have a salad and ended up with lasagne.
Now it's time to explore Scottish history some more. I've decided if I'm going to do a book on Scots in Texas I have to really grasp Scottish history, including the difference between Scots who came to America and Ulster-Scots, those who had migrated to northern Ireland or whose families had--it's a complicated story that I'm trying hard to understand.
Meanwhile, here's another grandkids picture. I can't resist!
Posted by judyalter at 6:25 PM