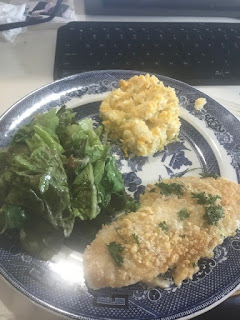 Blogger apparently won't let me post on the weekly blog, Gourmet on a Hot Plate. So I'll post it on Judy's Stew. Hope I haven't lost the other blog completely, but Blogger has strange and unfathomable ways.  That is also why part of this is single spaced and part double. I don't have time in my day to argue with Blogger.

A friend told me once she thought she’d becomes a pescatarian—no meat, but fish for your main source of protein. We won’t go that far—Christian so loves a good steak, that I could go forever without eating. But we have been working more fish into our diet. It’s a slow process of introducing Christian to new things—he loves grilled salmon now, after years of declining it. One night years ago I fixed it for Jordan and me with a butter/anchovy sauce. Christian took one bite and said if it was that good, he’d love it. Now he experiments with all kinds of seasoning and sauces.

Since my shingles diagnosis, the family was reluctant to eat out here with me (we’ve since resolved the problem of contagion). Eating alone, I realized I was subsisting on fish. I order salmon from a fishing family in Oregon. I took a can, drained it, put it in a single serving casserole dish, gave it a lot of lemon and a sprinkle of salt and pepper and topped it with sour cream. Ran it under the broiler briefly—a delicious supper. Another night, I had old-fashioned tuna casserole, which neither Jordan nor Christian will touch. Here’s what I did

One can tuna, drained and chunks broken up

1 can mushroom soup (if ambitious or a purist, you can make your own white sauce)

Whatever pasta you have left in the cabinet, just a handful, cooked

Put herbs in wine and boil hard until herbs turn black. Add to tuna. Add other ingredients except butter and panko. Put mixture in an oven-proof dish.

Melt butter and stir in panko, mix thoroughly and then top the casserole. Bake at 350o for about twenty minutes. Serves two generously.

But the real star of our fish menu was the lemon-baked cod we had one night recently. We tried it deliberately to enlarge our fish menu. It was a hit and goes on our list of keepers.

Salt and pepper to taste

Bake the cod on a cookie sheet. Cover the sheet with foil and drizzle olive oil on it. Lay the cod filets on top of the oil. Pour lemon juice of the filets generously. Salt and pepper and sprinkle them with dried parsley (it doesn’t have much taste, but it looks pretty). Melt butter and mix it into panko. Cover fish with buttered panko.

Bake at 350 for twenty minutes. Do not overcook. Overdone fish is a tragedy.

What unusual fish is on your menu? I remember my mother baking haddock in milk. I didn’t much like it, but I think I might try new recipes for haddock.d