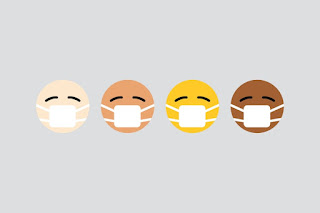 When the pandemic first started and we were all strictly quarantined, the change in our lives was very real—but to me, in my bubble in my cottage, the disease seemed distant. I remember a friend who thought my family was being over-cautious asked, “Do you know anyone who has had it?” I didn’t, although I heard that a neighbor a block away had been hospitalized and recovered.

But now it’s coming closer. The wonderful woman who helps me with the housework I can no longer do called to say her son had been diagnosed. One woman he worked with in a small team refused to wear a mask, although the others were all properly masked. Now all five team members have the virus. Shows you what one noncompliant person can do. And I worry that she and other family members may get it.

And the other night a friend of Jordan’s called. Her daughter had seen her boyfriend over the weekend, before Jordan and the friend went for a long walk together. Because they were outside and staying six feet apart, neither wore a mask. (A doctor friend has since told Jordan that when you exercise outside you should stay twenty-five feet apart, because with exercise you exerting more energy and expelling more air.) In effect, Jordan was exposed to a person who was exposed to someone who was exposed to someone who came down with the virus. See how distant the connection can be? It was enough to send Jordan yesterday to be tested. Our doctor’s office told her that the instant test has an accuracy rate of ten percent; the longer test, where results don’t come in for twenty-four hours, has an accuracy rate of eighty percent. So although we’re quite sure Jordan is all right, she and I are keeping a distance until she get confirmation.

Seems like it’s always something. This morning I woke with the sure conviction that those shooting pains on the left side of my face had organized and settled into a toothache. Fearing it would worsen over the weekend, I called the dentist’s office—haven’t had a call back yet, but I’m not supposed to get in a car with Jordan until she’s cleared so I have no way to get there. Life can get complicated.

And yet another complication—Wednesday night I placed a curbside pick-up order with Central Market, to be picked up at eleven yesterday morning. The day went south because of Jordan’s COVID test, and it was five o’clock before Christian went to pick it up. They had no order. I booted up my computer and found a three o’clock message confirming cancellation of the order. I thought maybe they had a new policy and automatically cancelled if you were late, but no—they told Christian the cancellation came from my computer. Here’s the rub—at three o’clock, when I supposedly cancelled the order, I was sound asleep. All I can think is that a poltergeist got to my computer. Hoping the order will be there this afternoon.

Today wasn’t through with me yet. I got an email from the organization that manages my TCU benefits, asking that I deposit the check they recently sent me. I do not keep checks lying around—if I got it, I deposited it. There were directions for fixing it online. But the web site “couldn’t locate my records” and I couldn’t log in. So I called. Of course, they had to transfer me two times; the woman I ended up talking to didn’t seem to understand what I was saying, told me to hit “Forgot my password.” The site promised an email, which never arrived. We played this game for a while, until I bowed out and decided my aching tooth and I needed a nap Tried again later, and the web site was down. Color me frustrated.

But there is good news tonight, Charlie Brown. Jordan’s COVID test came back negative, the groceries were waiting at Central Market, and I sent off the files for an audio version of Saving Irene. Proud of myself for figuring out the submission process to ACX—it wasn’t easy. As for Jordan, she confesses in retrospect that she’s much relieved—although she had assured me she was not concerned. I will get my hair cut tomorrow morning, which will make me feel much better, and while I may have a bad weekend, my tooth will be treated early next week. I’m looking on the bright side!

Posted by judyalter at 4:53 PM