Christmas is upon us


At least in my cottage, it is all of a sudden Christmas. And we haven’t even had Thanksgiving yet. I always thought you put Christmas decorations up that long weekend after Thanksgiving, when men were all watching football. Jordan has apparently not gotten that memo, and she has been busily transforming my cottage into a kind oif fairyland. She has managed that outdoor light that goes through a filter which transforms the beam into a sprinkle of a thousand tiny green pinpoints of light—and a few red dots. It used to go on at random times, like ten in the morning, but now it goes on in the evening. I love looking at it, though I’m not so sure how neighbor Jay feels about all those dots in his casita. Fortunately, he’s not there much.

Decorations have gone up inside too. I have no mantel, so the top of a lawyer’s bookcase substitutes as home for my beloved Jim Shores Santa Claus (purchased back when it was a real splurge for me). Next to him are three poinsettia candles, the most unusual I’ve ever seen, a gift though I don’t remember from whom. Pushed together, they form a beautiful pattern; apart, each is a riot of red. Woe to anyone who lights them. And next to that is a glass block with tiny multi-color lights inside. It was a carefully-made gift from a friend of Christian’s, some twenty years ago, a friend who has long since dropped out of our lives.


Jordan worried about the coffee table and kept trying to put the Shores Santa there, but I insisted he has been on the bookcase the four Christmases I’ve been in the cottage. So she stole Santa Mac and put him there—Santa Mac is as you would expect a Scottish Santa but he’s bigger than you’d think. He’s wearing a kilt and a sporran and he clutches a bagpipe, though not in a position any good Scot would recognize. He’s a gift from another good friend that I do not see these days because of quarantine. Santa Mac is named after my family name of MacBain. The couch sports a bright Christmas pillow, given to me years ago by a friend after I gave a program for her book club.

On the end table by the couch is the over-size brandy snifter full of Christmas ornaments that I’ve put out for years. Now Jordan just sets it up high in my hall closet from year to year, untouched except for an occasional much-needed dusting. And next to it is my Christmas tree, a small, artificial one though this year I meant to order a real one from a company that sells authentic miniature trees. Mine now is supposed to look like a Norway pine with separate distinct branches. It doesn’t have lights because it’s too hard for me to get over there to turn them off at night. 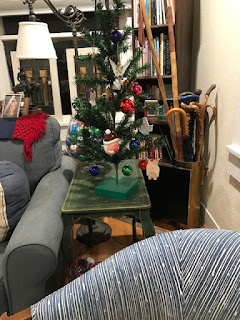 If you were doing a circle around the living area in my cottage, you would have come to these things in order. And then you would come to my tabletop fireplace. It was chilly this morning, and I turned it on for its cheer and its heat. It makes a great addition to the room.

Remembering the origin of many of my Christmas treasures makes me a bit sad, because several have come from people who’ve moved on out of my life. I suppose that’s inevitable—people come and go from your life and only the very best stay. I used to have huge tree-trimming parties at Christmas, and as I put out my large collection of ornaments, I could tell you exactly who gave me which. And the same was true—many had moved on, a few had died, but many ornaments came from people I still treasure. I cannot tell you how much I miss those big parties! I’m ready to make lists and freeze some fruit breads and get out dishes and decide on appetizers. Always the blue cheese ball and the caviar dip and maybe this year the curry with cranberry chutney—what do you think? I am making myself nostalgic! But I can hardly fit eighty people into a 600 square foot cottage in a year of social distancing.

2020 is what it is, and we must all make the best possible of it that we can. Stay Safe, well, and full of holiday cheer!

Posted by judyalter at 9:47 PM