No one should be surprised that the election is too close to call this Wednesday morning and may be that way for several days, in spite of trump’s premature and unfounded announcement of victory in the wee hours. What surprises me is how drained I feel, exhausted, worn out. I am staring at the TV and trying to make myself do some work at the same time.

Election night at first seemed a gay lark in the cottage. We had an early supper—Jordan fixed lemon/chicken/pesto pasta because she wanted a simple meal—from the number of pots and pans I put away this morning, I’d say it was anything but simple. But it was delicious. Jordan and Jacob settled down with a jigsaw puzzle, and Christian left for the peace and quiet of their house. I was the one who suggested the puzzle, but I stayed firmly rooted to my computer and the TV. Eventually, Jordan and Jacob had to take breaks—and I even took a nap, though Sophie was not cooperative. 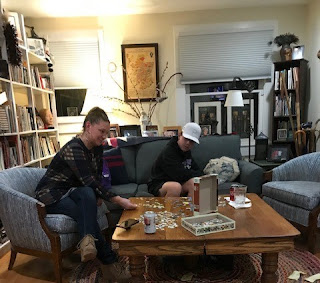 As states were called for Republicans, I grew increasingly depressed. I knew better than to hope for that much-vaunted blue wave, but nonetheless the thought was there. Clearly, it didn’t happen. I’ve been noticing for some time that Jacob, although favoring Biden, doesn’t see a whole lot wrong with trump. For distraction last night, I took it on myself to educate him. His explanation made some sense: “I just got interested in politics because of the pandemic.” That means, though, there is much history to catch him up on. He laughed a lot as I rattled off incidents and problems--I suspect he was laughing at his grandmother’s intensity. I am now in search of the perfect email or Facebook post that summarizes what I want him to know.

I didn’t sleep well. Insomnia is not one of my problems, but the last few nights I’ve wakened about three in the morning, beset by obsessive worries. Last night, of course, it was the conviction that while I slept trump was winning—well, he was indeed declaring victory, just not winning. There was one mental image that I kept going back to though for the life of me this morning I can’t remember what it was. Another night recently I was fixated, again about three, with those audio files. When my mind latches on to a problem at that hour, I seem to be unable to distract myself. I try to puzzle out other subjects or write something brilliant, but my mind snaps back like a rubber band. Occasionally I wake with obsessive COVID-19 worries.

Then, typically, around five, I feel a great sense of calm, and I sleep. This morning I dreamt that Christian and I were on the front porch of my childhood home (where he has never been)—he was studying tax information and I had Reader’s Digest in my mind—haven’t read that for sixty years or more! What interests me in retrospect is that there were two huge bulldozers in the narrow street around the park in front of the house and they were so noisy—I guess my dreams are audiovisual! Sophie woke me at  seven, far too soon. She was full of joy, racing around the yard, while I sat and tried to wish her inside so I could go back to sleep.

It may be a long week, folks.

Posted by judyalter at 8:17 AM