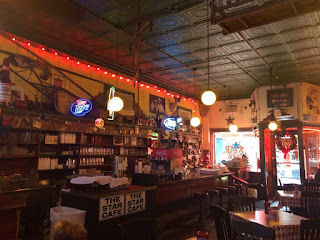 Always a joy to go to the Star Café. Friends Betty and Don Boles have owned the Stockyards restaurant for years, and for a few years around the turn of this century, I ran the cash register on Saturday nights. Now I go occasionally for the food and the atmosphere—and, of course, the company. The food—best chicken fried steak in Fort Worth, bar none. I never ate the stuff until I went to the Star and now I love it—but only here. It’s crispy, and flavorful, and tender. Tonight I split a steak and a baked potato with Betty, and had a small salad with their house-made ranch dressing—best ever. The steaks are also darn good, and even the hamburgers are hard to beat.


Atmosphere is funky western, though Don probably wouldn’t like that description. Lots of neon beer signs, walls covered with Texas memorabilia and signed photographs, tables covered with checkered tablecloths, scarred wooden floor. This is one of the oldest continually operating restaurants in Tarrant County. And rumors say it’s haunted—I even wrote a short story about a ghost seen there from time to time.


In reality, no ghosts. Just a lot of North Side folks and some others, ranging from friends from our church to “characters” of the North Side and everyone in-between. A warm, comforting mix of people, always friendly, always helpful. Tonight I was with Betty and our friend Jean, and we sat in the front window where we could watch the world go by on Exchange Avenue. A cowboy came and sat on the bench outside, playing his guitar—alas, we couldn’t hear it. Sometimes you can watch a mounted policeman patrol the streets. And Betty and Don love to invite “greenhorns” to come watch the Longhorn herd parade down the street. Then they take the greenhorns back to the Star for lunch.


Correction: Last night I referred to Amy Guyger, but even as I did, it sounded wrong. Still I had found the name that way on the internet. It is, of course, Amber Guyger, and today was another highly charged emotional day. Guyger’s mother took the stand, a woman so broken by grief that she could barely talk and mostly simply answered with, “Yes, ma’am,” while dabbing at her eyes with  crumpled tissue.


The most emotional moment came after the sentence of ten years was delivered. The younger brother of Botham Jean, the murdered man, took the stand and quoted John 3:16: “For God so loved the world that he gave his one and only son, so that whoever believes in him shall not perish but have eternal life.” Then, with remarkable grace, this young man—eighteen I believe—asked the judge’s permission to walk across the courtroom and hug the woman convicted of murdering his brother. It’s hard to imagine such grace of spirit, but I hope it sets a pattern for those who continue to cry out for justice. The prosecutor spoke and said the jury has done its duty; justice has been served. It’s what our system of government is all about.


And a moment of trivia: I promise I won’t come up with a new word every day, but I came across one today I couldn’t resist. Cockwomble: a foolish or obnoxious person. You may apply it to whoever you wish.
Posted by judyalter at 6:47 PM