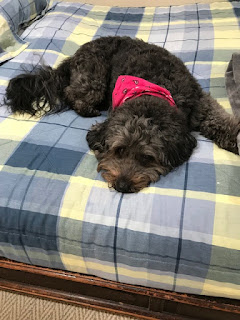 Sophie and I have reached a truce that I hope will last longer than Turkey’s cease-fire. But we just had a 36-hour war. Within that time span, she woke me early two mornings, woke me twice from a nap and insisted on going out once at 12:30 a.m. This is a mature, housebroken dog who can easily go twelve hours or more without going outside. She was just bored. I was exasperated.


Finally, the last time she jumped happily on the bed as I was peacefully napping, I lost it. I scolded her—a real lecture on consideration for others, not waking me, etc. Okay, I confess—I might have raised my voice. Er, yelled a bit. She stood staring up at me, her tail in a slow, tentative wag. I swear if she could talk, she would have asked, “Whatever in the world is the matter with you.”


She got her revenge that evening. I let her out around 9:30 and by 10:30 she still had not come inside. I called out “Cheese,” which is the standard bribe that brings her inside. Nothing. I could see her on the deck, watching me. But she didn’t move. It’s not as though I can rush out into the back yard and drag her in. With my walker, that way lies disaster. Finally I texted Jordan, who was almost asleep but sent Jacob to the rescue. I gave her the cheese—I am careful never to renege on something I’ve offered her.


They say dogs have no memory or concept of time. I don’t believe it for a minute. A cross between a miniature poodle and a Border Collie (two of the smartest breeds), she can outsmart me every time. She knew exactly what she was doing—punishing me.


PS: She woke me from my nap today, jumping on the bed with enthusiastic joy. But it was okay—I’d had my nap out.


This morning, she didn’t need to wake me. Persistent drumbeats did it for her, although of course they caused her to bark ferociously. The Paschal High School Marching Band was warming up across the street, getting ready for the annual Lily B. Clayton Elementary walkathon—the students all walk a course about a mile long, with a police escort and the band leading them. A nostalgic moment for us—for six years, Christian took the morning off to walk with Jacob, and I sat on the front porch to watch all the marchers take off. The march raises an amazing amount of money for PTO projects at the school.


A moment of giggles: Jordan and I went grocery shopping. Sitting on my motorized grocery cart, I wasn’t paying attention until my groceries were almost all bagged, and I realized she hadn’t forgotten to specify I wanted paper bags. The checker asked what the problem was, and she told them, tried to brush it off. But the man who was sacking promptly took each plastic bag and set it inside a paper one. Sort of defeated the purpose.


And a moment of pride: my printer jammed, but I couldn’t see where, couldn’t pry the back off to look. I found my printer model online, downloaded the manual, found the directions for unjamming, followed them carefully—and fixed it! My instinct in such instances is to wait and pounce on Christian when he comes home, wanting him to fix it. Makes me feel grown-up to have done it myself.