My blogging schedule—and every other schedule if I had one—is way off but for such a good reason. My Megan has come from Austin, bringing Brandon, Sawyer and Ford. I’d love to say the only reason they came is to see me, but there’s that little matter of the TCU/Texas game which is where they are right now. Megan is a loyal Frog fan, but both she and Brandon went to UT for law school, and he persists in cheering for the orange. Sawyer doesn’t care,  I don’t think, but Ford has long cheered for all things purple. Jacob remains ever loyal to his dad’s alma mater, Baylor, but is decked out today in a TCU hoodie. 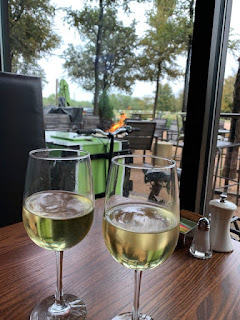 Jordan and I started out the weekend early yesterday by treating ourselves to lunch at Press Café, a place I like a lot but have a couple of problems with. The menu is interesting, the food good (I really like the deconstructed tuna salad), but they don’t take reservations. Every nice evening that I long to sit outside, it’s too crowded. And inside is unbearably noisy. We went at eleven which seems to be the perfect hour between breakfast and lunch service—got a table right away and could hear each other. It was cold outside, but still lovely to sit inside by the windows and look out at trees and grass—and a huge fire in a barrel—rather than other buildings.


It's a weekend of feasting. The Austin family had to wait for Sawyer to get out of school at 4:30 but they hit the road immediately and were here just before eight. We thought the traffic might be bad because of the game, but not so. We rushed off to Pacific Table where we were seated at a booth I didn’t even know existed—tucked away behind the bar, at the very back of the restaurant. Just right for the six of us (Jordan and Christian had another event), and it was much quieter than the front of the restaurant. We came home to celebrate Ford’s thirteenth birthday with chocolate cake—and new TCU gear for Jacob and the Austin boys.


Today I went with Jordan to drop the football fans as close to the stadium as we could get. Traffic was horrible, and Jordan got a scolding from a policeman at the first corner where we tried to let them out. Then we went to McKinlay’s to pick up lunch—not as easy as it sounds, though we lucked into a “to go” parking spot. I waited in the car while Jordan went in—thirty minutes later she emerged. I amused myself by watching people and cars—they are scary drivers in the University Village parking lot—and by reading a novel on my phone.


While everyone was at the game—Jordan and Christian are watching at a friend’s house—I napped, just to keep straight my record of having done nothing constructive today. Tonight, the ritual dinner at Joe T. Garcia’s. For my family, it truly is a ritual. Jordan tells me we’ll sit outside so I can hear—while I freeze to death, although at five o’clock, it’s pleasant enough I have the door open. A last bit of fall.

Posted by judyalter at 3:08 PM