Three friends and a stranger 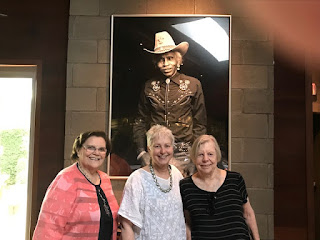 When I first moved to Fort Worth, some fifty-plus years ago, I knew nothing of the city and little more of Texas. My parents visited my brother at the Corpus Christi Naval Air Station and reported an almost tropical landscape. My then-husband, on the strength of one visit to Turkey, Texas described a brown and desolate landscape. I was puzzled. But uniformly people told me not to worry about living in Fort Worth, because we would be going to Dallas all the time.


It has not worked out that way. We arrived in the summer after the JFK assassination, and after having lived through that long weekend via TV, I was terrified at the thought of seeing the assassination site. But beyond that, Fort Worth kept us busy, and we found few reasons to go to Dallas.


By now, I have been to Addison and Frisco a lot to see one child and his family, but trips to Dallas itself? Few and far between. So it was an adventure for me to go with Carol Roark today, so we could lunch with Texas publishing giant and good friend Fran Vick. Carol drove, of course, and I was overwhelmed by the traffic, the changed skyline, and the dramatically changed patterns of the freeways. I could not even imagine myself driving there, but Carol, who worked in Dallas for years and still goes there once a week, zipped from lane to lane like she knew what she as doing and where she was going—and except for the actual location of the restaurant, she did know. I was in good and safe hands.


When I was director of TCU Press, Fran was director of UNT Press, and with Gayla, from A&M, we called ourselves Three Women of Publishing. We not only collaborated professionally, but we were good friends outside work—and that included sleepovers with conversations that required much wine and lasted into the night. My youngest son went to work for Fran’s husband and, years later, bought the toy manufacturer’s representatives business from him. We were family, and we knew each other’s families.


Carol and I have worked together and been friends for years. TCU Press published several of her books. As a friend, she was the first and most persistent to get me out and back to life in the world after my hip surgery left me on a walker. Meanwhile, at meetings of the state historical association and other groups, she and Fran got to be friends and colleagues.


Time and circumstances have kept us apart, so today’s lunch was a real reunion. We talked about publishing and the recent deaths of three of Texas’ literary giants, today’s politics (we’re all on the same page), families, food, aging (I tried to persuade Fran it’s all in her head) and who knows what else. It was soul satisfying and wonderful.


On the way out of the restaurant, Carol decided we should take a selfie. We were obviously bumbling around about it, so a lovely young woman at another table hopped up and volunteered to take the picture above. We had no idea who the man in the wall art is, though something is dinging around in my mind that he was an iconoclastic Dallas figure who drove an outrageous Cadillac with longhorns on it. But I can’t get beyond that thought to identify him.


Tonight, unexpected thunder and a bit of rain have lowered the temperature, added humidity we didn’t need but brought the nice new rain smell. I’m a happy camper.

Posted by judyalter at 6:05 PM