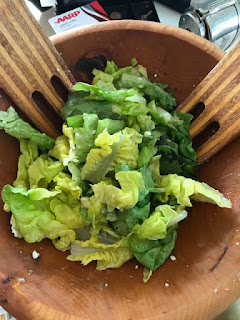 Of birds and dogs and dinner


An angel came to visit me today. I was sitting at my desk, with the door open as always, and suddenly a large male cardinal, in full red glory, landed on the screen—a tricky move, but he hung there just long enough to stare at me a moment, then he flew to the low wall next to the door—and in an instant he was gone. The old saying is that when a cardinal visits you it means someone from heaven is thinking about you, and, of course, I always think it’s my mom


Jordan put a more mundane spin on the story. She says the cardinal landed on the deck, outside the window where she was working, and kind of fell over before righting himself. She got up to see if he was okay—she suspected a wing issue—but he was gone by the time she got outside. So we’re praying that he’s safe and hearty and just came to give us a message.


I was surprised Sophie didn’t react, but she was sleeping in her favorite chair. That’s how she usually spends the mornings—cat naps with periodic forays to patrol the outside. But I think this morning, she was extra tired because she was absolutely hyper yesterday. She chased squirrels all morning, barking in an annoying manner. My attempts to lure her inside were ignored. Last night I mentioned the muddy footprints on the sidewalk, and only then did I learn that she had been “refreshing” herself in the kiddie pool recently vacated by Jacobs bass fish. Jacob found her standing in the muddy water—and I suspect it was only muddy because of dirt she had tracked into it. Thank goodness, she didn’t crawl into my bed.


Last night she refused to go out at ten as she usually does, and this morning she slept until I woke her. I think Sophie, now eight and in doggie middle age, might have learned that she can’t chase squirrels all day as she did at two. 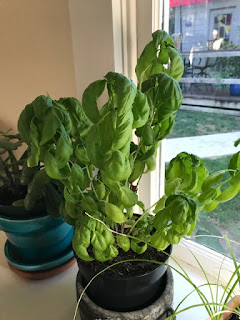 While animals seem to be flourishing in our little compound, so do my desk plants. My patio tomatoes are growing nicely, though I don’t see any blooms on them which might promise fruit. And my basil is growing enough that I soon need to do something with it—probably pesto. I used to have old-fashioned plastic ice cube trays. I’d fill each cube space with pesto, freeze, and then dump into a baggie. I need to do that again. Meanwhile I think I have the only weeping basil I’ve ever seen—it looks like it’s in desperate need of water, but I water it regularly and the leaves and stem are perfectly firm. I just think it’s a weeping variety—if there is such a thing.  Or an aberration. 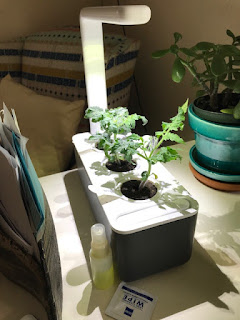 Monday nights are often salad nights for Jordan and me—a big salad with leaf lettuce and my special blue cheese dressing. So good.
Posted by judyalter at 5:49 PM