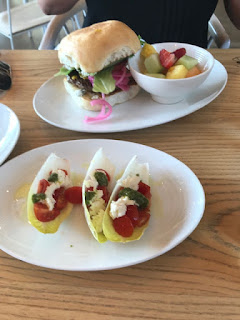 Jordan and I had an adventure today. We ate lunch at the Taste Project, an innovative restaurant where you pay what you think your meal was worth—or whatever you can afford. It’s been open about a year now, and I know many in Fort Worth have discovered it before we did.


Located in the burgeoning South Main Street development, the restaurant is industrial modern inside, clean and bright. Volunteers greeted us at the door, telling us how glad they were that we had come. We were early and had no trouble getting a table, but the restaurant began to fill up quickly. We shared an absolutely delicious lamb burger on an obviously house-made bun and a small plate of caprese bites—and were too full for dessert.


We overpaid generously, because it looked to us like some other customers might not pay or would underpay. Probably I was making snap judgments. but then again, I realize for some that lunch might be the only meal, let alone good meal, of the day.


Two caveats: don’t over-order, because no doggie bags are offered or allowed. And get there early or be prepared to walk. As far as we could tell there is no off-street parking and street parking is limited.


The people who greet you, the wait staff, and many of the kitchen staff are volunteers—perhaps that’s why they’re so cheerful. But they were all beyond pleasant. It looked to me like they had more volunteers than they needed, but if you’re looking for a good place to share your time, I suggest you call them. I would if it weren’t for my walker.


A couple of night’s ago friends and I had a delightful light supper at Winslow’s Wine Café. Winslow’s is popular, which means it’s noisy—so despite a relatively warm evening, we elected to sit outside. Under a shade cover, with fans blowing on us, it was quite pleasant—except for the flies that kept dive-bombing us. We actually had three wine drownings, but the waiter was pleasant about bringing us fresh glasses of wine. And we splurged—white chocolate mousse with a dark chocolate ganache for dessert.


I had one of those annoying phone calls the other day—time to renew my property insurance so they needed proof that my alarm system is active. The monthly fee is automatically deducted, so I didn’t have a bill to send. I went online and found in almost three years I haven’t set up an account yet. To do that, I had to supply a verbal password—which, of course, I had no idea about. And to bypass that, I had to tell the operator, the names and phone numbers of two people on my emergency call list. I completely went through all the children before I landed on the right ones. The operator I was talking with was short on patience but long on background noise, which only made it worse.


Finally though I had an account, and I called the insurance office to ask what I needed tosend them. “Just take a screen shot,’ the young woman said. Confession: I don’t know how to take a screen shot. She hooted and said, “Neither do I, and I’m married to an IT guy.” We finally bumbled around the web site until I fund an insurance certificate I could download as a PDF and send to her. When she emailed, “Got it!” I wrote back and said, “That loud noise you heard was my sigh of relief, clear across town.” She replied, “Glad you clarified. I was wondering what that noise was.” Doing business with someone like her makes up for the impatient lady with the security company. Win some, lose som.
Posted by judyalter at 6:31 PM