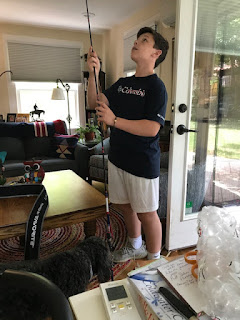 It’s pretty much been a shipwreck kind of a week. But the high point is Jacob’s birthday—tomorrow, his thirteenth. He turns into a teen. But. he got his “Juju” present early because who can disguise a fishing pole when it comes in a long, skinny box. Yes, he has other poles, but this was a special one that he was excited about. He brought the package out to the cottage to open, and I’m sorry to say that I wasn’t quick enough to grab the phone and capture a picture as he pulled the pole (protected in a fabric sheath) out of the box. The happiness on his face was magical. He took it fishing that day and caught one small fish.


Today he came out to the cottage to ask, “Did I tell you I caught a fish with he pole you got me?” I assured him he had. I am so delighted with his absorption with fishing—it gets him out in the great outdoors and away from TV, iPad, and phone. I haven’t heard a word about “Fortnight” in months. But as Christian pointed out to me, fishing is not an aerobic exercise.


Otherwise it’s been a week of checking things off the to-do bucket list. The pest control people sprayed the back yard with what they assure me is an organic mixture, mostly eucalyptus and rosemary. It’s the remaining ingredients I should have asked about, but the deed is done and supposedly good for ninety days.


Next to check off the lists was the dentist. The hygienist cleaned my teeth and turned to her computer to write up her notes, but her keyboard was dead. She protested she’d just put a battery in it the day before, but it was clearly dead. I came home, booted up my computer—and my keyboard was dead. I called the dentist’s office and asked them to tell Stephanie, the hygienist, that she’s a jinx. Then I ordered a new keyboard. I have no idea what Stephanie did.


Jacob and I went to pick up dog food at the vet’s, with him pointing out one-way streets to me and prodding me to go the second a light turned green. I finally told him I am sure he’ll be a good driver because he’s had so much experience telling me what to do. “It doesn’t seem very complicated,” he replied with assurance.


Tomorrow, before the birthday celebrations begin, he will help me take Sophie to the vet for her annual checkup and then we’ll scoot out to Central Market to pick up groceries for dinner. He’s requested shrimp, mashed potatoes, and asparagus. No cake, though his mother baked one. “We have to have a cake for us,” Christian explained.


A week of storms too. Unexpected, unpredicted rain on Monday, a sprinkle on Tuesday when we were told it would be clear and dry all day, and then a thunder-rumbling storm in the night that had Sophie cuddled as close to me as she could get. Tonight they predicted violent storms with large hail—so far, sunny blue skies.


I’ve gotten a bit of work done, an anonymous mystery synopsis and sample critiqued for a program of Sisters in Crime and a manuscript read and recommendations submitted to an academic press. I missed some blogs because of the keyboard problem, although tonight, knock on wood, I find I can do pretty well on the laptop keyboard. Every once in a while, for no reason, it wipes out whatever I’ve just done. I need to get back to my major work in progress, but I am waiting—and hoping—for inspiration to strike. Perhaps I’ve just let it sit idle for too long.


It’s also been a week of ethnic meals—sushi for lunch at my favorite Japanese place the other day and, tonight, enchiladas at a Mexican place I’ve never been to. I was impressed that when we asked for boxes, the waiter not only boxed our leftovers but brought clean flatware to transfer it. And he worked hard to clean the floor under a table near us where teenagers had made a holy mess with chips.


All in all, an odd week but not really a bad one.
Posted by judyalter at 6:06 PM

Sometimes a present just can't be disguised with wrapping. The year I gave both my sons new snow shovels for Christmas, I just wrapped them in paper - no doubt what they were. But my boys didn't let me don't. One pretended he thought his was a wide golf club, the other try to play his like a guitar.

I'm glad Jacob likes his fishing pole and that it was only your keyboard that died.

Thanks. I love that you gave your boys shovels. One year I gave mine tool belts. They used them to have a duel over who Mom loves the best. Boys are so much fun!