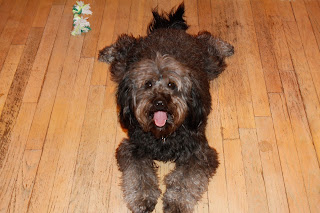 The neighbors behind me have a couple of chickens. They had three but one day they let them out on the grass, not realizing their gate was open. Another neighbor’s dog came charging across the lawn, and before they could stop him, he got one of the chickens. The two survivors are still traumatized and rarely come out of their coop. I watch out the window when I can, because I like to see them.


But today, when I let Sophie out in the afternoon, she had a conniption fit at that corner of the yard. Through the window, I could see the plants and bushes shake, and her deep guttural sounds, unlike squirrel barks, alarmed me. I went to the door once, and it looked like she was stymied in getting to whatever she wanted. And then I saw the neighbor in his yard, so I figured he would take care of it. Stern orders to Sophie to come inside went unheeded. She did come in once, very excited, and barked at me a couple of times as if to say, “If only you knew how exciting this is.”


The neighbor’s wife called. There’s a thin strip between the fence and my cottage. Some years ago, when I had a dog that was an escape artist, I had it blocked off with a wire gate, because I couldn’t see the dog and always worried he’d get away when he was out of sight. It seems today one of the chickens somehow ended up in that strip, and Jason, the neighbor, was on his way to get it. I called Christian to say there was a crisis and would he come out and help—my principle concern being to get Sophie away before she broke down that unsubstantial wire gate. But I woke Christian from a deep sleep, and he was befuddled, wanted to talk about it when I wanted action.


All is well. Jason returned the chicken to its own yard, and everyone went about their business. I can’t really blame Sophie for her uncontrollable behavior. She is, after all, a Bordoodle—half border collie, bred to look after barn and farm critters. I’d like to believe if she got to the chicken all she would do is herd it, but I’m not at all sure of that. She does sometimes try to herd the other dogs in the family.


By coincidence, I had just been to the web page of the kennel where I got her. Best I can figure is that they were experimenting with poodle/border collie crosses, and she was of an early litter, perhaps their second. Today they offer three sizes of bordoodles—petite, miniature, and standard. Sophie is a miniature, the product of a border collie bitch with a miniature poodle dog. She is 30 lbs. and sturdy. At first glance you’d think she is a poodle, but I work hard to prevent grooming from making her look like a poodle.


I’ve always felt a bit of guilt that I paid a lot of good money for Sophie, when perhaps I should have rescued a shelter dog. To my amazement, the fee I paid for her six years ago is now a drop in the bucket. The price has at least doubled. Still, she’s worth every penny.


She is one of the best dogs I’ve ever hard—why do I feel disloyal to others in saying that? She is sweet, affectionate, well-trained, healthy—and stubborn, headstrong, and spoiled. When she’s worried about me, she sleeps on my bed or right next to it. When I’m in the main house, she wants to come back out and guard the cottage. She knows that’s where we live, although she spent several years in the house. She takes her responsibilities most seriously, but also her rights, like a treat after dinner and dinner on time when she’s hungry, please. If she doesn’t get her way, she’ll bark until she does. If pushed too far, she’ll growl, though the one night she growled at me, she was so remorseful she spent the rest of the evening at my feet, looking deep into my eyes as if to ask if I still loved her.


At six, she has lost none of her puppy enthusiasm for chasing squirrels or greeting visitors. And in those circumstances, she is deaf to my commands. But otherwise, she is well trained—no accidents in the house, sleeps by my side during the day unless a squirrel calls, comes when called, knows sit stay, down.


In short, she’s like a lot of people I know—not perfect, but darn close. Okay I admit it. I adore her. 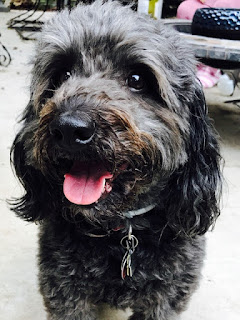 Posted by judyalter at 7:13 PM