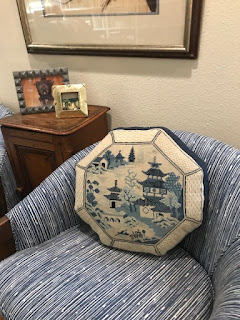 Not sure why I feel sad tonight. Maybe it’s because no one is in the house tonight, and I feel a bit isolated. But I often—usually—spend the evening without seeing them. I guess it’s a comfort to know they’re there. Besides, I’m expecting a certain eleven-year-old home soon, and he always cheers me. He’s been to Cotillion, so I’ll know that he’ll have tales to tell, including about the latest love of his life.


Maybe it’s because of an eye problem which I suddenly took seriously, although in retrospect it’s been coming on for some time. But I scared myself today—and exasperated an admissions person at the doctor’s clinic. I know just enough about a lot of medical matters to be dangerous—and today it was detached retina. The admissions clerk scolded me on several counts, until I finally told her she sounded antagonistic. “No, not at all,” she said and seemed to forgive me requesting a new appt. so I could see the doctor I have seen for 30 years instead of one I didn’t know. We old folks don’t change easily. But I did talk to one of his colleagues who said it didn’t sound like a detachment, and he’ll see me next week. Now to figure out someone to take me.


I don’t even think it’s that. I think it’s the rash moves the sitting president has made in the last couple of days. Threatening Puerto Rico, cancelling the Iran nuclear agreement, slashing the ACA—how many people will die before we get that straightened out? His zeal for erasing President Obama’s accomplishments, regardless of damage to our country, is purely appalling. And while he’s made these bold public moves, without Congressional support, serious things are going unnoticed: a bill to end the EPA, another to end the Dept. of Education (the only good I can see there is that is gets rid of Betsy de Vos). It’s like a slash and burn campaign, and it scares me.


I have no doubt Trumpf will not serve out his full term, but it will take so long to undo the damage he’s done. How many people will die? How much public land will be sold and exploited? How much irreversible damage will be done to the already-fragile environment? I somehow can’t wrap my mind around all that without wanting to weep.


I read a statement by Trumpf today on the release of an American family held by the Taliban in Pakistan. Apparently, negotiations for their release have been ongoing for some time, but Trumpf took it as a personal victory. Trumpf went on and on about how the Pakistant were at last respecting us. The emphasis on the term “respect” scared me. It was like he equates it with fearing us.


This man-child makes me sad—for our country, for me, for my grandchildren and yours. How long will it take before the Cabinet invokes the 25th Amendment about an impaired president, or congressional Republicans develop some backbone? Privately, they are worried about him, from what I read, but publicly they are cowering in their shoes.


A bright note in the day: the upholsterer delivered a throw pillow he’d been working on. It’s needlepoint, done by a dear friend probably at least 30-40 years ago. It had gotten beaten down over the years—four kids, seven grandchildren, and who can count how many dogs?—and he gave it new life. The design is from the classic story found on Blue Willow china. I grew up eating off that china, and will use my mom's daily A most meaningful pillow for me.


And another high point: Jordan and I, having done luxury shopping yesterday, did staples shopping today—don’t ask how much I spent—and I again demonstrated my prowess with automated shopping cart. This one worked fine, and I didn’t hit anything, not even Jordan, though I backed into her cart once.
Posted by judyalter at 6:48 PM