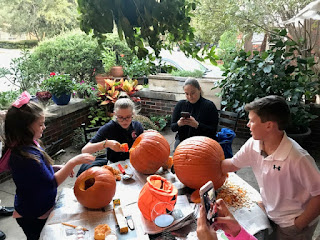 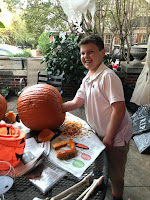 Didn’t get this finished last night, so it’s first on my morning agenda. There was a pumpkin carving party on the front porch last night. The kids were funny and squeamish about cleaning out the inside of the pumpkins, and, sad to say, no one thought about saving the seeds to toast. But the breeze came up and after the sun went down, it was cool. I didn’t last to see the finished jack-o-lanterns. Tonight is to be rainy and cool, so I think I’ll stay cozy in the cottage.


My cooking over the weekend was moderately successful, enough so that I’ll keep trying. But it was with a touch of sadness that I read a New York Times cooking column recently on giving dinner parties. I have no dinner table around which people can gather—only a wonderful coffee table made out of a cut-down old oak kitchen table. It’s hard to imagine people bending over a coffee table set with your finest china (I gave it all to the kids anyway) and crystal. So I’m reluctantly admitting that those days are over. No prime rib with au jus gravy, no whole roasted duck, not even a whole roasted chicken, let alone turkey.


And when we gather for family Thanksgiving, the girls banish me from the kitchen—except when it’s time to pull the liver and gizzard from the bird. They’re all too squeamish to do that. Some of my traditional dishes have been replaced by their versions, and no one will eat my cranberry sauce. The girls who married into the family cling to that shimmering jelly stuff sliced from a can. Jordan does make great mashed potatoes, and Megan’s apple pie is killer.


So I guess I’ll stick to happy hour entertaining, or dinners for two or three. And, hey, cooking for one is sometimes rewarding!


I didn’t get a lot done yesterday—who can pull their eyes from the television or their nose from Facebook? Fascinated, I watched and read about the unfolding scene caused by Mr. Mueller’s revelations and indictments and had the sense that I’m watching real history. I remember Watergate, of course, but I wasn’t as intense about politics then. I was more occupied with changing diapers and the like. Today as I remember my mom’s intense dislike of Nixon, I wonder if intensity doesn’t come with age, with a sense we’ve got to get this world right for our grandchildren. Now I’m waiting for the next shoe to fall, the next sealed indictment to be opened. But I have work to do. As my mentor always says, onward and upward!

Life is great, the sky is not falling!
http://money.cnn.com/2017/10/31/news/economy/vacations-consumer-confidence/index.html