Panic and other moments in the day 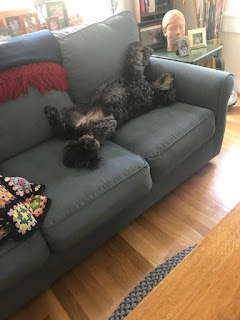 Sophie decided to go walkabout this afternoon. After my obligatory afternoon nap, I let her out as I always do. Oops. About two minutes later I noticed the yard gate and driveway gate were both open…and no Sophie in the yard. She never misses a chance. Bless Jordan. I called her and she was out the door with a leash and a treat. After stopping traffic as Sophie ran across the street, Jordan finally cornered her and brought her home, nonetheless the worse for wear. I cannot describe the panic I feel each time a dog, any dog, is missing. In this case, I feared a car hit though I also worry about dognappers. I have become a little calmer because Sophie consistently returns unscathed and joyful about her outing, but that worry is always there.


Sophie had a hard day anyway. The plumber and upholsterer were both here today. The plumber required many trips outside to see what was going on; for the upholsterer, the plumber—by now a good friend—locked her out in the yard, which caused her great frustration. She recovered by napping on the couch.


I now have three newly re-upholstered chairs. I’ve thwarted Sophie’s tendency to sleep in the wing chair by putting a cushion in it. She eyes the barrel chairs, but I’ve only seen her in one once. 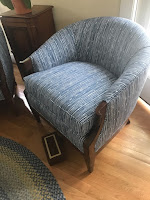 The couch seems an obvious choice. The chair she’d slept in all her life was so stained and dirty that I’m ashamed—a friend is putting it in her cabana for a dog chair (appropriate). And I’m reconsidering Sophie’s bath and grooming schedule. That thick doodle coat is too much for me and I send her to the groomers, but I think now it must be more often.


Years ago, a neighbor and good friend needlepointed a pillow for me with the Blue Willow pattern on it. I have my mom’s Blue Willow china plus some that my ex gave me. My kids grew up on it, and now that I’ve downsized by distributing all the other china sets I had to my family, Blue Willow is both my daily china and my entertaining choice.


The pillow, however, has gotten worn and dirty over the years. Jordan wanted to get rid of it, but I wouldn’t hear of it. The upholsterer took it today and will use leftover material from the chairs to back it.


I argued with my neighbor tonight. Nothing new. We argue all the time—he’s a conservative, and I’m a liberal. I like to say I’m a social liberal and a fiscal conservative, but the two may be incompatible. Tonight’s topic was Stephen Colbert. I contend that when government, FCC in this case, investigates social media for unfavorable comments about our presumptive president, we are on a steep, slippery slope. Jay argued that it was profane. I dislike profanity, in fact I’m pretty much a prude on the subject. But I think the level of comment doesn’t affect my basic idea—censorship is censorship, and it leads to dictatorship. Anybody want to weigh in?

Posted by judyalter at 5:50 PM

I believe that they shouldn't be able to "pick and choose" the language that's deemed acceptable for TV from one instance to another. It doesn't seem that Stephen Colbert said any words on his late night show that aren't widely accepted, nowadays, right or wrong. If "someone" in Washington has complained and doesn't like the context of Colbert's remarks, that's their problem! If we can't laugh at the horrible twists and turns our country is taking, what do we have left???

Amen, Becky, an thanks for your opinion.

I'm all for free speech...so do you agree with me the thugs at Berkeley are anti-free speech liberals?

I don't know much about the situation--did Berkeley refuse to have her or did she refuse to come because she felt welcome? If she was willing, I think she should have been allowed to speak--and that comes from me who thinks Ann Coulter is despicable. But if Berkeley invited her for pay, I don't think after the hullabaloo, they should be obligated to pay her.