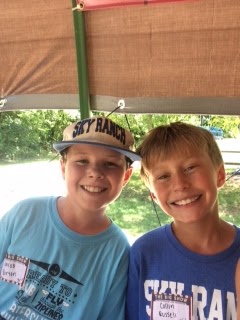 Summer camp—what are your memories?


Did you go to summer camp as a child? I was so much a bookworm and so disinclined toward sports that I didn’t do much of that kind of thing. I have only a vague memory of one experience at a camp. I believe it was a scout camp, and my memories are of woods, sandy soil, bunks in a cabin, and really wishing I was at home.


Jacob suffers from no such inhibitions. He left yesterday for this third year at Sky Ranch in East Texas. This year, for the first time, he’s staying two weeks. And his buddy Colin Russell went with him—Colin has not been to Sky Ranch before and they will be bunkmates. I suggested to Jacob that he could show Colin the ropes. Jacob looked at me and said, “What ropes?”


Apparently Jacob did not sleep well Saturday night—excitement, though I doubt his claim of being awake until five and waking again at six-thirty is accurate. Nonetheless, he was excited and, as he said, a bit nervous. I assured him that was normal. I think he’ll have a wonderful time.


His excitement got me to thinking about the things in life I’ve missed by not being adventuresome, preferring a book over an amusement park. I have never, for instance, ridden a roller coaster nor do I intend to. I have never burned to travel, see distant places, have wild and exotic adventures. Several years ago a church leader called to say they had one seat left on an African trip and it had my name on it. I thought he didn’t know me very well. It’s an adventure to think about traveling to Chicago, let alone Africa.


Some of my kids love to camp. My idea of camping is a nice, comfortable motel with a hot shower, a cocktail lounge, and a comfortable chair for reading. I love the outdoors but on my terms—sitting by the lake at Colin’s house or the distant memory of sitting on a dune and watching the sun go down over Lake Michigan, smelling the lake, feeling the warm sand beneath me.


I’m not complaining that God didn’t give me the adventuresome gene. I lived my life the way I wanted to, avoiding situations that would make me uncomfortable, like roller coasters and camping. But I’m grateful that my kids and grandkids are more ready to fly out in the world—they ski, some scuba dive, they swim (something I’m now reluctant to do), they fly all over the country and abroad without a thought. Sometimes I wonder what it would be like to reach out and grab all of life’s experiences—but it’s a chance I don’t want to take.


I hope Jacob has a marvelous time, and Colin sees the ropes.
Posted by judyalter at 7:46 PM

In a way, Judy, I can relate to this. But, I have lived (I think anyway) a rather adventurous life and consequently am now pretty content to just stay at home. Of course, I have the place made to suit me personally and a huge outdoors to play with which makes all the difference, I think. I have traveled the world (literally) but really, at times, think I would like to travel more---only to suddenly change my mind. A little fear, I think, sits in when it comes down to the nitty-gritty and I realize that although there are places I would like to see, I don't want to be with others. So much has happened to me in the past that the idea that I will be among people is a bit upsetting. This, I feel, is causing my children a bit of an alarm---my reluctance to go out and merge with he world---but I am, for the most part, content where I am. I have my easel, my piano, a rather large library, nice office, and, unfortunately, telephones. I do not like telephones. I have hunted, fished, played tennis, golf, boxed but now am cognate that when I was started onto that path, I really didn't want to go. I was quite content, as a young boy, to simply stay in a comfortable chair, reading. I was asthmatic and allergic to all sorts of pollen (the doctors once told my parents that they would have to move from Pierre, SD to Arizona because of my illnesses) but my parents still insisted that I "give it the old college try." I did although I most definitely was not gifted in the Norman Rockwell concept of a young boy as shown in his LIFE magazine covers. That was the boy my parents wanted; not a bookworm whose idea of a great time was going to the library on summer days. And, suddenly, I realize, that the way I am now is the way I wanted to be in the beginning. My mother did encourage reading but she wanted to exercise a firm control over what I would read. Comic books were okay (and believe me I had a large collection), the Hardy Boys and such books but when I tried to venture into James Fenimore Cooper, she drew the line as I wasn't old enough to understand them. I read them anyway due to a kind, elderly librarian who always wore flower prints and smelled of lilac and kept the book I wanted to read under her desk at the old Carnegie Library. Now, I can be the boy I wanted to be and, strangely enough, I'm now occasionally struck with the desire to read a Hardy Boys book once again and Cooper and watch the old television shows that I loved to watch when we finally got a television when I was 12. I have concluded that I am now in my second childhood and this time, living it the way I wanted to in the beginning. I wonder if the world is going to be ready for me when I grow up this time.

Nice memories, Randy. You've had the best of both worlds, and you seem to be happy with where you are now. We are both blessed with happiness...and with family.