News of the day...such as it is

I am so tired of seeing the McKinney pool party or the Duggars on the news--fortunately both seem to be fading though I'm sure the long tail will surface. Now there's that Congressman who declares disabled people are a drain on society. Help? Do I have to throw away my handicapped tag?
On a more personal note, for the oldsters among my readers (you don't have to confess publicly), Amazon is running a joint promotion with AARP for discounts on tons of books. Began last march and continues through October--up to 50% on some books. The good news as far as I'm concerned is that my novel, Ballad for Sallie, is among the titles discounted this month. Ballad for Sallie is set in Fort Worth toward the end of the 19th century and includes good guys/bad guys Luke Short and Longhair Jim Courtwright plus a schoolteacher just come from the East to the Wild West, all narrated by Sallie, a child of the streets. Written years ago but I still have a soft spot in my heart for this book.
To find out about this and other titles, here are some links:

As far as I'm concerned, the other news of the day is pretty mundane. It was a grocery and a catch up on email day. Did have lunch with a good friend at LaMadelleine (I love their tuna sandwiches) and we went to Sprouts, a grocery I've never explored. I had forgotten to get canned pie filling (that's a whole 'nother story) but all they had was pumpkin--wouldn't make a good fruit salad. We zoomed by Albertson's on the way home and I got a large jar of peach pie filling. We'll see.
Tonight I made myself tuna pasties--essentially biscuit dough from a tube (am I the one who eschews prepared foods?) filled with a tuna/grated cheese/chopped celery/parsley/sour cream filling. The recipe is so old I couldn't even find what magazine it came from or a date. So I feel free to share it: 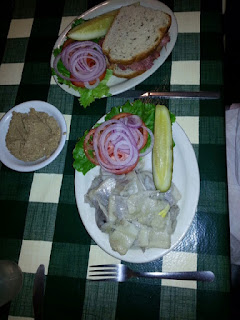 Heat oven to 400. Mix 1 can albacore tuna in water, drained, with 1 c. shredded cheddar (I like sharp), 1/4 c. diced celery, 1 Tbsp. chopped parsley, and 1/3 c. sour cream. Separate biscuits and spread half into ovals as big as you can--top with 1 good Tbsp. of filling and then top with another  elongated biscuit (recipe says roll them out but I just press with my fingers). Seal the edges and brush the tops with melted butter. Bake at 400 on ungreased cookie sheet for 15 minutes--unless you use an insulated cookie sheet put another pan under it to prevent burning the bottoms.
Strange thing: we hear these days that packaging is cheating us--there's less food in many containers than before. This recipe says serves six, which would mean 12 biscuits. But there were only ten biscuits in the tube, so I came out with five pasties. Good enough for me, but it struck me as part of the changing times.
Maybe that goes along with my comments posted today on Vicki Batman's blog about the weird foods I eat: https://www.blogger.com/comment.g?blogID=8535414384309157179&postID=6709800340457246816&page=1&token=1434162340453 The comments are more interesting than my post.
Posted by judyalter at 7:36 PM