The elves in my house aren't always on the shelves 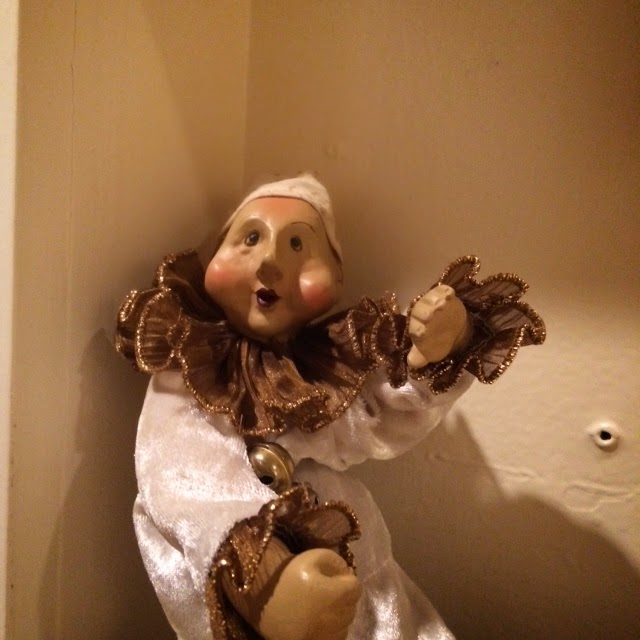 There's an elf floating around my house. He's not your standard Elf on the Shelf in red. Rather, he's a clown who looks like he might do mime. Dinglebell--that's his name--belonged to Elizabeth the year she lived in my garage apt. and I guess when she came to visit at Thanksgiving he flew back hidden in her suitcase. Anyway, he appeared right on target Dec. 1 and has been flitting around at night to odd places in the house. The first thought on Jacob's mind every morning is to find his elf--if he's at home, he looks for Jack, his Elf on the Shelf; at my house he looks for Dinglebell. On his way to school from home he has to find Dinglebell at my house. This morning when I woke him for school and asked what he wanted for breakfast, he said, "I'm not telling you until I find Dinglebell." This took a while. (Note to Dinglebell: please don't hide in such obscure places.)
The other elf in my house is my adorable eight-year-old Jacob. I have to say Dinglebell is a lot easier to deal with sometimes. But Jacob is staying from Tuesday till Friday after school when he'll go to his other grandparents (I get the school and homework duty but then they'll take him to football, and I'm mightily glad to be relieved of that). I woke at three this morning, worrying about getting him out the door to school on time--a worry he doesn't seem to share. 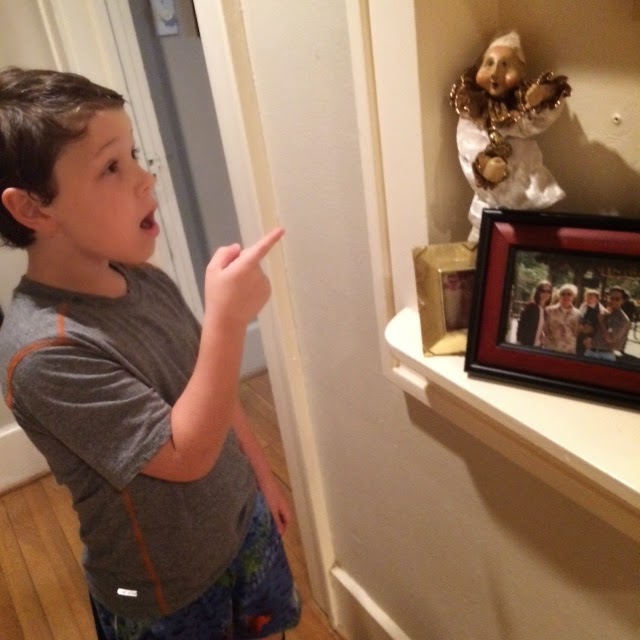 (Jacob can be a bit of a ham)
So far all is pretty smooth. Last night he played with a friend, then they both came here where I cracked the whip about homework and then took them to the Grill. Tonight Betty and I took Jacob to Lucile's for Lobsterama--he tasted a tiny bit of lobster and declared he was ordering it next time but no thank you, he didn't want another bite. He liked his six-inch cheese pizza. I had lobster pot pie which was delicious but didn't really give me my lobster fix. I'm going back for lunch Friday and will probably have the lobster BLT.
I enjoy having Jacob here--though I lose patience at times. This afternoon he did not want to do his math--it was too hard, he'd do it tomorrow, it wasn't fair, it was stupid (I cautioned against using that word again). I explained if it was that hard, he might not finish it in one day and should start today. When he got into it--with my help--he enjoyed it. Same thing with a shower--begged and pled to put it off until tomorrow, told me no one at school would smell his hair (I did). Once he got into the shower, I thought I'd never get him out. He uses the hand-held shower head to spray water all over his body until I call enough.
Lessons learned: tonight I'm discussing breakfast choices before he goes to bed. And if he wallops me in the eye with his elbow again, all bets are off. Meantime I wonder where Dinglebell will end up tonight. Big sigh.
Posted by judyalter at 7:40 PM