Throngs of witches and vampires.... 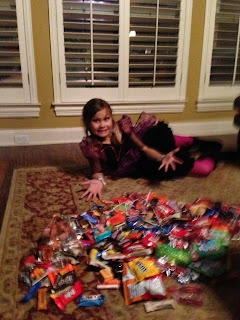 Granddaughter Eden with her loot tonight 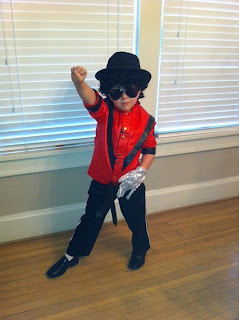 Jacob, otherwise known as Michael Jackson, all ready for a party
and goblins, ghosts, Raggedy Annes, Cinderellas, and some scary and really original costumes--one young man (not a kid) had on a green morphsuit (head to toe, covering his face though he said he could see and breathe); another was, I think, a marshmallow--huge. I told him he had a weight problem and should not eat the candy. Actually I glimpsed a skinny kid under the costume.
I live in one of those neighborhoods where families come from far parts of the city by the carload to trick or treat. Our streets are full of bumper to bumper traffic; the parking would make you think there was a carnival at the school; a neighbor one street over told me she spent over $60 on candy and last year they gave out 1300 pieces. The people crowding the streets are incredible, and they came up my walk in a steady stream.
Usually I turn out my lights and go next door but this year Jay is out of town and Susan was unsure what she wanted to do, so I suggested my porch with vegetable soup (from thefreezer) for supper. Elizabeth joined us, though she got cranky--her word, not mine--and tired before it was all over. She was appalled at the number of people and how few were from our neighborhood. One new neighbor from down the street introduced herself, and Elizabeth recognized another girl who lives down the block. But that was it.
Mostly these imported kids are polite--their parents are with them and both parent and child say thank you, wish us a happy halloween, and so on. It does stretch my imagination to come up with a new commennt for every costume, but I try. I am concerned about the tiny infants who are trick-or-treating--really?--and I resent the obvious adults. To me, this is a kids' holiday, and adults don't need to be begging for candy. I tried to adjust my attitude this year, but the occasional greedy kid who grabs a handful instead of settling for the one piece we hand out bothers me. At least two parents reprimanded their children and made them put the handful back, and when we said to one boy "We've seen you before"--he had a distinctive treat bag with a skeleton hand on it--he quickly tried to return the candy but we told him to keep it.
All in all, it's fun to see the cute kids but it's sure not my favorite holiday and by the time we ran out of candy, about 8:15, I was done. Susan went home, I turned out the lights, cleaned the kitchen, and settled at my computer--but I'd left some inside lights on. And would you believe some kids knocked on the door. Now that's nerve!
I tell myself these kids come from neighborhoods where people don't offer treats--of course they don't! They're all over here. But I try to be charitable, Still, what happened to the good old days when your neighbors used trick-or-treating as an occasion to visit?
Posted by judyalter at 7:41 PM