The wonderful world of adoption

A young couple I'm fairly close to (that translates to we're related by marriage and see each other at a lot of family gatherings and I like them a lot) has been fostering two little pre-school sisters of mixed race for 20 months. Today, the court finalized their adoption papers, and they are a family for sure. My daughter sent me a wonderful picture of all of them--including grandparents and the judge--taken after the ceremony. It made my day, and I've been going around with a  happy smile. As long as the children were under the jurisdiction of the Child Protective Service,  no one could take their picture, so it was moving to see them all together in a picture. Those are lucky parents--for over a year and a half they could have lost the children--and those are lucky little girls. They came from a background of abuse and neglect--the night, late, that they arrived at their new home they were dirty and hungry. Now they're happy, secure, well-fed and, yeah, a bit spoiled but only enough to be endearing. They are learning the limits of good behavior, something they never would have learned in their original environment.
I have been to court four times to finalize adoptions, and each time it was a thrilling moment. The same judge presided at three of the four proceedings--the legendary Honorable Scott Moore, who was known as the best child advocate in the county. But I had never had to contend with biological parents who wanted their children back, CPS, or any of the difficulties this young couple has faced. Still I identify with them.
I remember once at my house the mother said fiercely, "These are my kids now." I know just how she felt, and I'm not sure people outside the adoption experience understand the feeling. Mine are not my adopted children--they are my children, born of and in my heart if not of my flesh and blood. Oh, yes, sometimes the subject of adoption comes up in conversation, but they treat it casually and so do I. We are one of the closest families I know, and I love it. I don't quite know how to put it in words, but over the years I have heard remarks from others that you don't really have a child until you give birth or nurse or whatever. It's not true. For some reason, as a single parent, I have been lucky beyond belief--I have four kids who have grown to be substantial citizens and loving parents, while remaining loving children. A lot of biological families can't say that. I've heard people say they wouldn't adopt because you never know what you'd get--true of biological children too, though I've kept my tongue in my head. And others say no, they wouldn't feel the same about a child that didn't have their blood. I keep quiet then too and pity the speaker.
Do I want my children to find their biological parents? Honest answer, no. They are my children, they carry my values and training and shaping, if not my genes. I can't say it enough. They are mine! And none of them, now in their 30s and 40s, show any interest anyway.
When you adopt and are open about it, you find it's a small world--people say, "Oh, I'm adopted," or "My children are adopted" or whatever. There's a whole world of happy adoptive families out there, and I'm glad to welcome this couple into that circle. And so glad their uncertainty has come to an end. I don't feel at liberty to publish the picture of the new family, but here's a picture of my happy family. The young man next to me is my oldest son; the pretty blonde on the other side is the next in line; then there's Jamie, with the dark hair, at the far right of the picture; and my youngest daughter is kneeling in the front with her husband and son. Good-looking, aren't they? 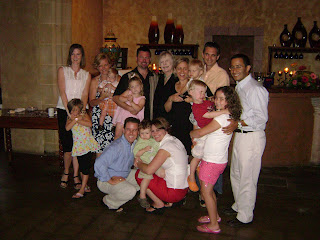 Posted by judyalter at 7:42 PM