Megan, with Lochness in the background--and the wind blowing.

The broom that covers so many hillsides.

One of Scotland's shaggy cows, responsible for their delicious Scottish beef.

Megan and me outside Edinburgh Castle.

Sipping Scotch at the Talisker distillery on Skye. The Scots never call the drink Scotch--it is whiskey.

Our ferry across the inner sound from Skye to the mainland. 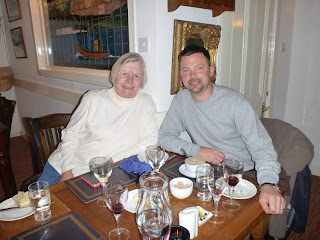 With Colin at Harbor View, our first night in Skye. 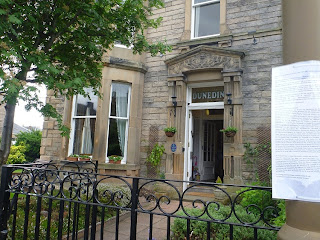 Dunedin House, our B&B in Edinburgh. You can see the name in the glass transom. Many Scots homes have names, and I was never sure if a house was a B&B or if someone had just put their name on their house.

A catch-up blog of pictures--I found out that if I accessed Blogger through Google Chrome instead of Explorer, the pictures post fine. So sorry I didn't have them to go with my lengthy descriptions.

Day four was a day of travel for us, and we began it, after just a few short miles, on a seven-mile, single-land twisting, curving road high over a valley—the kind of road that would scare me in the Rockies, but I was perfectly comfortable with Colin driving (well, almost). Inching along such a road can seem like it takes forever, but we finally descended to the level of the Inner Sound. We were going to cross back to the mainland by ferry. There was a boat ramp, a sign that said “Wait here,” a shack, and no one around. But across the sound we saw the boat, and pretty soon it started back across, tacking to avoid getting swept too far in the strong currents. Two men operated a sort of battered small ferry; they did everything by hand from collecting fares to steering, loading, etc. The ride was short—five minutes at most, and we were on the other shore, headed for Fort Augustus and Lochness.
On this drive, we crossed the highest pass we had seen in Scotland, but I managed to doze through part of it. When I woke though I noticed the lush green pastures were gone, there were neither houses nor sheep. But you could still see hundreds of small streams—and an occasional more spectacular waterfall—coursing down the mountainsides to feed the rivers and lochs. We soon descended though, intending to make it to Fort Augustus for lunch. Phillip, our Skye host, had told us there was either a salmon ladder or a series of locks in the middle of town—we never did see it. As we drove, we went through small villages clinging to the banks of the loch.
We stopped at the inn in Invergarry. I was so concerned with my own stomach, I guess, that I didn’t pay attention to what the kids had. But I had haggis again, with peeps and tatties. This time the dish was served with three round towers of each food—the turnips and potatoes mashed, and all covered with the gravy I’d come to love.

Megan and me, with our hair testifying to how windy it was.
The castle for the day was Urquhart, sitting high on a rocky point over Lochness. Urquhart is a ruin, but it is operated by Historic Scotland and, no surprise, you get to the ruins through a guest centre with an extensive gift shop. I actually found several MacBain and MacKay (my daughter-in-law Mel) items there. We went to the film showing, which showed the castle in its prime and then the 16th century destruction of it when inhabitants blew it up to keep it from the Jacobites (it was hard for me to keep track of which castles were allied with the Jacobites [House of Stuart] or the English [Hanoverians]—I think they changed sides from time to time. The last scene of the film shows the castle in roaring flames, then the curtains on a wide panoramic window are flung open and spectators are staring at the ruins. A truly dramatic presentation. We walked out and around the castle—pictures Colin took show Megan and me with our hair at angles, testimony to the strong winds. Then we climbed one of those incredibly steep inclines and two flights of stairs to get back to our car.
Next on our sightseeing list was the Lochness Centre and Exhibition, devoted to the history of sightings of Nessie, the Lochness monster. I assumed this facility was operated by Historic Scotland but no such luck—it and its neighbor, NessieWorld, are privately owned tourist traps, though Steves recommends the Centre. A succession of films traced the history of efforts to find Nessie—each film was shown in a small darkened grotto-like room; at the end of the session, the lights came on only long enough for you to find your way to the next grotto. I thought it was spooky and longed to find the exit. Much of the information was pretty technical, and I didn’t learn much I didn’t already know: there are convincing sightings and statements but no proof the monster exists (I think it probably doesn’t). But as Nessie, the stuff of folklore, she’s delightful and, to my mind, friendly. I did wonder if monsters are ageless—Nessie must be getting pretty long in the tooth these days. The Centre has a large gift shop, and we all bought various stuffed versions of Nessie for the younger kids back home, plus some other trinkets. I was beginning to believe that Scotland has the concept of marketing itself down pat.
We finally made it to Inverness and our B&B, Ryeford House, operated by a charming woman named Joan. Everything was very Victorian—patterned wall paper, ruffles, long drapes, even lace holders for extra rolls of toilet paper. Room was quite satisfactory, though I slept on the daybed on the theory is was farther away from those who might be annoyed by my snoring. Megan said she was finally getting used to it. Joan’s great virtue to my mind was that she served us smoked salmon with scrambled eggs both mornings we were there.
We asked about dinner recommendations, and Joan said to go to the foot of the street, go down the steps, and we’d find lots of places. She mentioned one called Rocpool. We got to the foot of the street and found a reasonable flight of stairs. But then we turned a corner—another flight of stairs and a small street of shops, no restaurants. Surely this was not our destination. Turned another corner and were confronted by at least two stories worth of stairs (at least we were going down, not up). We found ourselves on a pedestrian plaza, all kinds of shops but few restaurants. One called Bella Italia, but who goes to Scotland to eat Italian food? Finally, across a bridge we saw Rocpool and headed there only to be told they required at least 45 minutes advance notice. We were directed to a bar two doors away, which proved to be a restaurant—their entrees looked so good I was tempted to forego Rocpool and stay there, but we didn’t—just had wine. At Rocpool we had a delicious dinner—I had gravdlox and crab salad, I think Colin had duck, and we had desserts—chocolate mousse for me and pear cake for the kids. We were eating high on the hog.
Faced with the prospect of those stairs, we took a cab back to Ryeford House.
Posted by judyalter at 5:38 PM