Scotland, Day Five: The day I went to Scotland for

This was the day that drew me to Scotland: we visited the MacBain Memorial Park near Dores in Kinchyle (at the north end of Lochness) and then the battlefield at Culloden Moor. (We put equal emphasis on all three syllables, but the Scots say “Cull ódd en,” emphasizing the middle syllable.)

We started the day with salmon and eggs, a sure sign of a good day. Then it was off to nearby Dores. James McBain, the MacBain of MacBean (I get a bit lost in all the various spellings) advised me to stop at the Dores Inn for directions. We did, the kids had yet another cappuccino, and we got good directions. Then our hostess pulled out the MacBain guest book—people have been signing a guest register since the early ‘90s. It was a thrill to me to see all those variations of MacBain from all over, Minnesota to Europe and South Africa. I wished I could have found my parents’ signatures, but they likely visited in the 1970s. Colin said it would be cool to bring his kids there someday and show them where the three of us had signed.

The park is up a hill on a single-lane road—what in Scotland isn’t?  I’d heard it is two acres, but I don’t think it’s that big. A black iron gate and a sign welcome the visitor with the words “No Burial Ground/No Bodies Around/Just Fond Recollections/Ancestor Connections.” James McBain told me it had been “cleaned up” last summer, so I was pleasantly surprised to find a dab of Scotland au naturel. The park perches on a hillside, and about the only landscaping has been the clearing of a small area by the gate and rough wooden logs, creating steps leading up the hillside in two places. Trees and grasses and heather abound, and from the cairn (to me, it looked like a stone bench) at the top, you can catch a glimpse of Lochness through the trees. We sat there quietly for a bit, believe it or not in sunshine filtered through the trees. The family farmhouse is nearby, no longer occupied by MacBains, and we didn’t see it.
The small park is important because it gives the clan a piece of Scotland. In 1745 Bonnie Prince Charlie or the Young Pretender rallied Jacobite loyalists to take back the throne of England for his exiled father James Stuart—the throne was then held by the House of Hanover. Because the MacBains fought for Charlie, they lost their land after his defeat in what was known as the Clearances, harsh retribution against Jacobite followers. A clan without land is almost not a clan. Some clan members were apparently deported to South Carolina; others stayed as tenant farmers.
In the 1960s, Hughston MacBain of Chicago (chair of the board of Marshall Field & Co.) was appointed the MacBain of MacBain and bought the present piece of land. He would, he wrote later, have bought more but it’s hard to get a Scot to part with land. The park is, to my understanding, on the original 200 square miles once owned by Gillies MacBean. At last, the MacBains had a piece of Scotland again, albeit small.
Our next stop was Culloden, and by the time we reached the visitors centre, a cold rain had started again. The centre was opened in 2008 and has a marvelous and extensive exhibit covering three long halls—on one side, the British story, on the other, the Highlanders. At the end a brief film dramatizes the Highlanders’ loss—they fought with courage and passion and wild warlike cries, but they were overwhelmed by the disciplined and better armed Recoats. 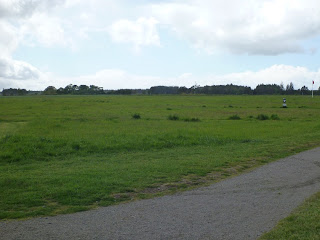 Gillies MacBean was one of the most heroic Highlanders. Standing 6’4” and armed with targe (shield) and claymore, he stationed himself at a gap in a stone wall. As each Redcoat came through, he was cut down by Gillies’ claymore. He managed to kill thirteen or fourteen (reports vary) before he was killed. Supposedly, one British officer cried out, “Save that brave man.” I’ve even heard it was General Cumberland who uttered those words, he who became known during the Clearances at “Butcher.” Other MacBeans fought at Culloden—I saw the name Angus on a long list and a little research indicates a second Gillies was on the field and Angus’ son, Paul, who succeeded his father as chief of the clan and the Laird of Kinchyle, a title the clan leader held since the early 17th century.
It was too cold, wet and windy to walk out on the moor, which is well marked with signs marking various moments in the battle that lasted less than an hour. We got earphones, headed out, and turned around and came back in. A good friend, who told me “Culloden will break your heart,” said she walked every inch of the moor, crying and cursing at the same time. Like her, I found visiting Culloden—and the memorial park—highly emotional. 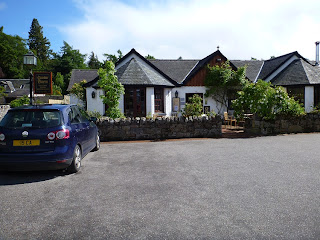 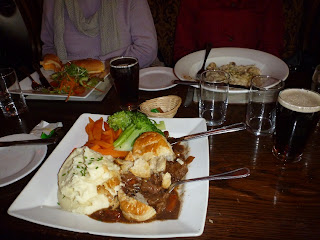 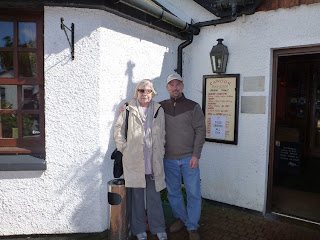 Emotion or no, we were hungry, and we were headed toward the castle of the day, Cawdor. Colin kept saying we’d find food on the way, and sure enough, the village of Cawdor had a lovely inn or pub where we had a late and lazy lunch. I had a wonderful sandwich of sharp Scottish cheddar, tomatoes and onion, Megan had a risotto, and Colin had the best beef and ale pie I’ve ever tasted. 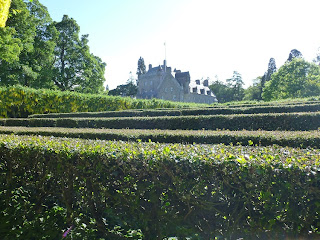 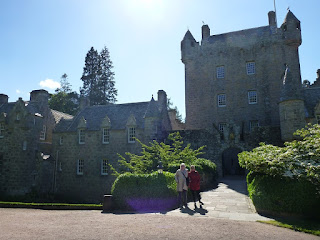 Cawdor Castle should bring Shakespeare to mind. Remember that the three witches forecast that MacBeth would become the Thane of Cawdor and there’s the ominous prediction about “when Dunsinam Woods to Cawdor doth come.” (My spelling may be off on the woods.) The MacBeth/Cawdor Castle connection is historically impossible—the castle wasn’t built until the 14th century. Cawdor is an occupied castle; the widow of the Thane lives there from October to April and opens it to tourists from April to October—a good way to pay for upkeep, I’m sure, though it seems to bad to choose Scotland in the winter and not the summer. We toured the rooms she occupies (from behind ropes, of course) and heard a guide say that it takes three days to take down the tourist guides, etc. and prepare for her arrival, and then three days to reverse the process in the spring. We also saw the dungeon (with some interesting stories told in the signage about local grudges), the new kitchen which is in daily use when someone is in residence, and the old kitchen, full of cooking artifacts from previous days. Cawdor had the best maintained grounds we’d yet seen, including a strange tree with clusters of blooms that looked like yellow, upside-down lilies of the valley to me.
Back to Inverness and an incongruous dinner: Spanish tapas.
Posted by judyalter at 6:38 PM