Tonight is Twelfth Night, or Epiphany, the night when Christians recognize that God came to earth as a human being in the form of Jesus Christ. This revelation is particularly tied to the Magi, and I'v always thought of Twelfth Night as the night the Magi brought their gifts of frankincense, myrrh, and gold to the Baby Jesus. When I tried to explain that tonight to Jacob, he fixed me with a long look and said, "I don't know what you're talking about." (We've got to get that child to Sunday school!) But Twelfth Night is also the night when you must take down the last of the Christmas decorations, lest you run into bad luck. 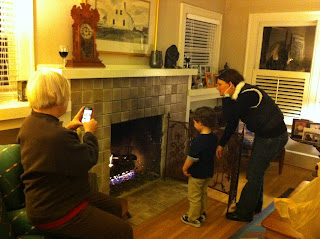 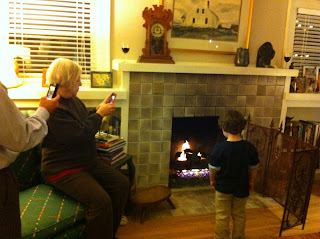 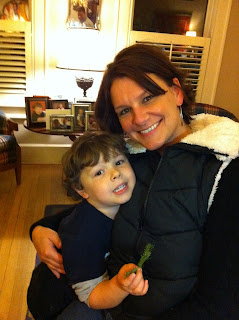 When I was a child, neighbors semi-adopted me, showering me with gifts and attention. I called them Auntie E. (Emma Elizabeth) and Uncle Jack, and she, always the grand lady, had a tradition of each person burning a small branch of the Christmas tree on Twelfth Night and making a secret wish. We've done that in my family ever since. Jacob came into Tree Trimming in early December asking "Are we going to burn a branch tonight?" So tonight he was most excited that we were actually going to do that. From the pictures above, Jacob was obviously the focus of our celebration. It's getting harder and harder to find fresh greens, since everyone has fake trees, but Susan and Jay had a green wreath, and she brought the greens and took part in our burning ceremony--Jay was out of town. It's a nice way to put an end finally to the holiday season. And, fittingly, Christian, Jordan, and I put the decorations back up into the attic for another year.
As I said, I've been revising my second mystery since my mind was already in that world. But last night, to my horror, I disovered I only had nine chapters, maybe half the novel, on my hard drive; then I discovered on a zip drive a file titled No Neighborhood for Old Women revised. Guess what? I'd already revised it once and maybe done a better job. So now I'm starting all over, checking for extra words, outlining by chapter--nice that I have something to keep me busy. I'm actually not too upset--the more I go over it,the better I'll make it. I still feel that I don't have control of the plot, and I can pinpoint things that need to change.
Posted by judyalter at 7:26 PM