The stock show, the midway, and--oh, my! 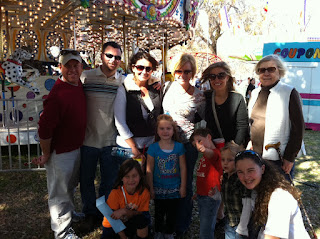 With seven kids in tow (well one old enough to do lots of carrying and towing) we "did" the stock show today, and tonight I am an old and tired and broken woman. Parking is so remote I don't even want to talk about it, and the crowds were unbelievable. We began with the animal exhibits and saw lots of goats, then a few rabbits and roosters (well, I think they were) outside the FFA young animal exhibit, where the kids were entranced with the baby chick and ducks and with one huge sow nursing her piglets.  By then--we'd been there maybe 45 minutes--everyone was hungry, so we went to the Roundup Inn for lunch. In contrast to the years I  remember from when my kids were little, it's now a food court, and I had a pretty good Subway club sandwich. Then off to the petting zoo--except Megan "parked" me on some shady steps and I read emails on m phone. Just finished when she came back to say the kids voted to bypass the petting zoo because of a long line nd were at the midway. So I went and watched them on the various rides, which really was lots of fun. Jacob came down a really steep slide all by hmself. But it also involved a lot of standing, and my back really began to hurt. Then we had to have a junk food break--funnel cakes, cotton candy, candied apples and the like. Then more standing around--we were there from 10:30 to 2:30, and I honestly wasn't sure I could make the longwalk back from the far corner of the fairgrounds to the car at the far opposite corner. Jacob, Ford and Sawyer each won a fish--which meant sweet Christian went to PetSmart for fish-ready water, bowls, gravel, food, etc. The boys are thrilled tonight.
We had never celebrated Jamie's birthday, so he got carte blanche on where we ate supper--and we went to Mama's Pizza on Berry Street, because it's a sentimental favorite of his--he hung out there a lot in high school and college. Beyond that, I don't see much to recommend it, but then I'm not big on pizza. And they don't serve wine--just beer. It was fun to have us all together, and I saw an old friend who had known the children when they were little.
Tonight, well before ten, my house is quiet--everyone is exhausted and in bed. Makes me feel better--it's not just the old lady who got tired out by the stock show. But I am ready for bed.
Posted by judyalter at 7:58 PM