A miscellany, mostly of food 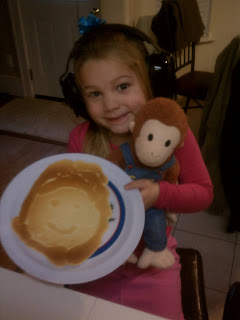 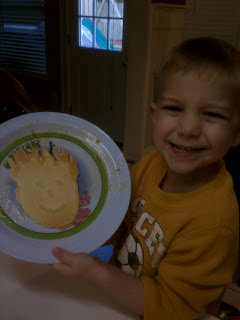 These are my Houston grandkids, Morgan on the top and, below, Kegan, with their breakfast pancakes this morning. Sme time ago I saw something--TV? the Web?--about Guy Fieri (the Dives, Dumps and Drive-Ins Food Network guy who will be in Fort Worth for SuperBowl) doing pancake portraits. He did a self-portrait that was spot on. Colin has long been creating shapes and alphabet letters in pancakes for his kids, and he once carved a pumpkin that was the exact, perfect likeness of his father. So I sent him a link or something, and apparently this is his answer to the challenge. It isn't quite his dad--maybe looks more like Fieri's spiky hairdo, but the kids are obviously thrilled. 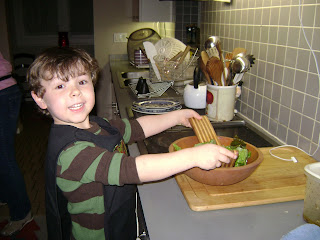 Tonight I cooked for Jacob and Christian--I had purchased the ingredients for a cheesy, ziti casserole becaue it was an easy recipe that Jacob could make with me--but then he tired of cooking, and I wanted to use that ricotta before it spoiled. So I made the casserolele this morning﻿--with low fat ricotta and skim milk mozzarella (or maybe the other way around). I still have some salad dressing that Jacob "helped" me make-well, I've added to it a bit since but he took credit since he tossed the salad--oh so gently, as I told him, so as not to bruise the delicate greens (I remember that from a restaurant in Chicago in my youth).
This casserole calls for using a jar of prepared marinara sauce, which I happened to have. I was amazed when I mentioned to both my daughters that I had found a way to spark up prepared sauce, and they each said, "I always doctor it." I added a bit of wine, bay leaf, balsamic vinaigrette, and brown sugar--omitting the suggested red pepper flakes in deference to Jacob and the bit of cream cheese on the theory that there was already way too much cheese in this reipe. Jacob ate it though only after announcing he didn't like pasta. Christian said, "Okay, if you don't like it, tell me what it is." Jacob: "Apple?" He ate enough to get ice cream.
There's a poltergeist in my house--or else senility, early or not, has set in. Yesterday when I came home from shopping my front door was unlocked--the alarm was on and nothing was touched, so I dismissed it as confusion on my part. I really thought I had locked it, but who knows? But this noon I lost the remote to my office TV--I wanted to change the channel from NBC 5 to 452, the Food Network channel. Have you ever contemplated having to push the up channel changer button 447 times? I searched; it was nowhere. So I ate my lunch, answered emails, and resolved to take the desk apart, although I'd pretty much done that.
When I went back into the office, there it sat in plain sight. I know it's easy to overlook the obvious, but this was SO obvious. I'm on the alert. I've often thought of writing a mystery--short story, maybe--about maybe a ghost living in a house or an actual person in the attic. Sometimes I hear things that go bump in the night but I figure it's the dog making a noise, an old house creaking, the wind blowing. I'll be alert now for strange things. Do you believe in poltergeists? 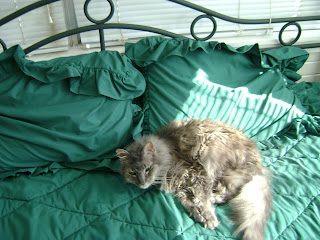 Wywy so enjoys the warm sun in the back room these winter days--he spends hours curled up there, sleeping contentedly--an old man's delight and right. Scooby on the other hand doesn't realize he's an old man. Tonight I was alarmed because he didn't come no matter how much I called when I put his food out--he has something (a possum?) cornered in an old rotting tree stump in the back of the yard. I can see where Scooby has clawed away much of the  wood. Life with animals is pretty intresting.
Posted by judyalter at 6:53 PM