An Old Friend is back 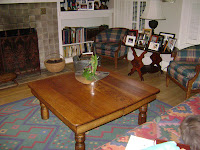 When my ex and I were first married, we lived in Kirksville, MIssouri, home of the original school of osteopathic medicine. He was in school there, and I had recently finished my masters in English Ed. at what we then called the Teachers College, so I was working at the osteopathic college--I had a strong family background in osteopathic medicine. But we were poor, and we furnished our house from estate sales. Mom and Pop would move off the farm, and the kids didn't want that old oak furniture, so they sold it at auction-like sales.This table is an unusual square oak kitchen table. I'm not sure what we paid for it, but I have a round oak pedestal table with ball feet that I got for $3 (this was in the sixties) so I guess that gives you an idea. We committed what is probably antique murder by cutting the table down to coffee table height, but it went with us to each of the four houses that was lived in Then I got it in the divorce--he declared he no longer wanted old but was interested in Oriental modern. Great! I wanted the old stuff, and I still have most of it--a buffet with glass knobs and burled wood insets and a marble top. I remember I paid $12 for it just before we were moving to Texas, and he was furious that I was going to move a heavy marble top across the country!
But I had this table in every living room the kids and I had (we moved several times) until in the mid-'80s we moved into a ranch house--the first I'd ever lived in with a family room separate from the living room. The square oak was relegated to the family room when a decorator friend convinced me to get a glass-topped brass coffee table. That's been in my living room ever since, but it has become a problem--with grandchildren. They lean on it, they walk into it, when they were still crawling they hit their heads on it. To this day, Jacob tests me by leaning on it and watching to see what my reaction is. I say no, he moves, and in a minute he's leaning on it again--and watching me. So I decided that the glass table had to go to the guest room--where the square one had been relegated. Lewis, who keeps my house together, refinished the oak one and I came home today to find it in the living room. It is truly like having an old friend back. I confess I'd been home for several hours before I realized, "Wow! My table is here." But then I just sat and stared at it. It's a wonderful table.
Busy day, lots of work on my desk at the office, lots of Sisters in Crime emails when I got home, Christmas presents to order, phone calls to make as Obama block captain. And the biggie--a lunch meeting of my editorial board. Not many of them were present but the provost was, and he was the one I really wanted to hear my comments, so I deem it a success.
I think I may just loaf and read tonight.
Posted by judyalter at 5:29 PM