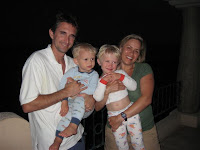 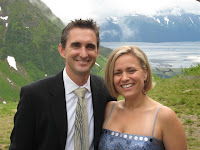 This is my Austin family. I don't get pictures from them often--their lives are too busy--so I thought I'd show them off. They've just been to Alaska (on the left) and southern Mexico (on the right), somplace I can't pronounce, spell, or remember, but it was south of Cancun. I got a bit mixed up and when I first looked I wondered why in the world Brandon took a suit and tie to a Mexican resort. Then, of course, I looked at the beautiful background and realized it was their trip to Alaska for a wedding. Pictures of the ocean and view from their casa in Mexico were equally beautiful. Megan says she's ready to go back to either place right away.
Can't talk much about writing, because I haven't gotten back to my mystery since I last posted a blog. I'm going out for an early supper tonight and then will put myself at the computer and stay there, hoping to revise a chapter tonight. Meantime I decided this blog should have more about cooking, so I thought I'd describe my casserole-for-one last night. I made a basic flour and butter roux, added millk for a stiff white sauce, then thinned it with white wine, put in peas and cut up cooked chicken breast, topped it with cheese and broiled. Good last night and good today for lunch. I tried to tell Jordan how to do that once, but she boggled at the white sauce directions.
An update on my poor balance: the doctor confirmed today that it is anxiety which, he says, cycles for no known reason. He said it's a chemicl/hormonal imbalance in my brain and may be likened to a flare-up of diabetes or thyroid problems. After assuring me he was confident it would pass as it has before, he also assured me I should not feel guilty or weak about it--sometimes I think if I would just gut up I could walk across that open space. Not so, according to the doctor. He's given me a prescription and told me to take it daily instead of trying to tough it out, as I had been, and he's given me a signed application for a handicap parking sticker which will probably banish my fear of trips to the grocery. His last words were to be sure to take Xanax before I go to the dentist at 8 a.m. tomorrow.
Work was fine today and I got things done, but it was one of those days when I wished I could stay home with my mystery. I am to talk to a gentleman Thursday about a young-adult book which, I presume, would be a paying project. I could use the money but I think I'll decline in order to stay focused. I'm learning so much about the mystery genre and, some days, feeling so good about what I'm writing. Of course, other days I despair, but . . . .
Hmmm. Tonight I'd like spaghetti. Definitely not on my diet, but . . . .
Posted by judyalter at 3:13 PM