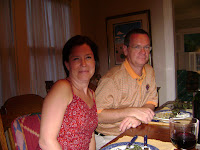 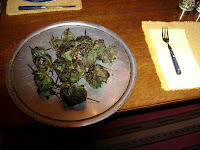 I finally found a use for the fig tree in my back yard. A few summers ago it bore lots of figs, and when I could get to them before the birds did, I gave them to friends. But in the last few years, it has only sprouted hard little green things that have never ripened. But today I made lamb meatballs wrapped in fig leaves. We had a neighbors dinner, and Jay--the handsome neighbor--got to grill them, which he declared was beyond his expertise. I had picked the leaves (24) and washed and blanched them but I expected help rolling them around the meat mixtture. Susan helped, Sue declared there was no room for her (but she did dishes, bless her), and Jay declined to help because, as he said, "I'm a man." No wonder he likes Sarah Palin. But he did a good job, and they were delicious. When they were grilling, you could smell the fig leaves. You didn't eat the leaves, of course, but unwrapped the meatballs. Above is a picture of the finished product. And a picture of Jay with Sue, my neighbor on the other side. I tried to take a picture of Jay and his lovely wife, Susan, but it was way too dark. Anyway the meal, which I worked on much of the day, was a success--lamb meatballs, tabulleh, a cucumber sauce, and hot dogs for Sue's kids, although Hunter ate a meatball and liked it. Jay brought a wonderful appetizer of toast, mozarella, anchovy and tomato, and we had one of our neighbors dinners that I enjoy so much. We sat around the table and talked for a long time--each time we learn more about each other and become closer friends, and I feel truly blessed to have such neighbors.
This morning in a rash moment I offered to make chicken salad for Jordan for lunch, so she and Jacob arrived about eleven. I have discovered chicken salad we both love--chunks of chicken (not shredded), chopped scallions and celery, equal parts of sour cream and mayonnaise (no, none of it low fat) and a good helping of blue cheese. Jordan ate two helpings. Jacob and I ate a lot of blueberries--I asked him to stick out his tongue, and it was very blue. He was in a really happy mood, fun to play with, and it dawned on me that I usually see him at doinner time when he's tired. Today he was a lot more playful and giggly, pretending to be asleep whenever I said I was coming to get a kiss. He had laughing eyes, which he often doesn't have in the evening.
The change of seasons was very evident at Central Market yesterday. The vegetables of summer were all gone--I wanted snow peas and sugar snap peas, but there were none. Tomatoes were few, as were the berries of summer. Fall is upon us, even if the temperature hasn't caught up with the times.
Posted by judyalter at 8:04 PM