A day of trivia 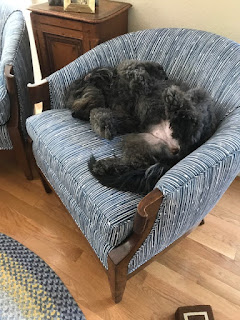 There’s nothing like being completely relaxed and confident of your safety, as Sophie demonstrates in her favorite chair. I’m thinking of switching chairs around, so that the two matching club chair wear evenly from her attachment to them. This thought became more insistent today when I crawled into my unmade bed to nap. Did you ever sleep in a beach bed? One with sand that you could not brush entirely away? That’s what this felt like—gritty, only there’s no sand around. It was grainy old dirt from the back yard. My bed is another of Sophie’s favorite spots. She’ll teach me to make it earlier in the day, though my mom taught me to let a bed air out before you pulled the covers up.


I come from a family of nappers. We believe in good, solid afternoon sleep. My dad walked a mile home from his office for lunch every day, took a 20-minutes power nap, and walked back. My power nap today stretched into an hour-and-a-half of solid sleep. In my own defense, because such a long nap makes me feel lazy or guilty or something, I will say that I didn’t sleep well last night. But I dreamt heavily this afternoon. My family was caravanning in several cars—no idea where we were going, but we were in mountains. And I ended up in a small pickup, going at a high speed down a steep mountain road, with son-in-law Brandon driving. It was not hairpin curves but a road that clung to the side of a mountain and wound around it. B is and was in the dream a good driver, but the dream was so intense that I lay in bed for 30 minutes, trying to get rid of it. I think it may having automatically converted my heart back to a sinus rhythm!


I am a bust at radio interviews—there’s no way around it. After confessing the mix-up on my last interview and detailing the preparation I’d done for today’s, nothing happened. I called the designated number two minutes before the show was to start and got a recorded message that the show had not yet started; please call back within 15 minutes of show time—did that mean 15 minutes before? After? For the next 17 minutes, I called at least 17 times—and got the same message. Emailed the publicist who said to let it go; she’d find out what happened.


My rant for the day: every day I think the man in the White House cannot do anything more outrageous, but he exceeds my expectations. Now he’s demanding a rush to a tax bill because it is urgent after the hurricanes. I’m sorry, but how were the rich damaged, other than a few wrecked Caribbean second homes? It’s the poor, those who live at the edge of poverty, who were pushed over that edge. The bill does nothing for them, not one blessed thing. The NBC coverage of the devastation on Tortula only emphasizes where America needs to put money—and it’s not in the pockets of the rich.


And I’m puzzled as I can be by the news of the deal Senator Schumer and Representative Pelosi made with Trumpf about DACA recipients. Trumpf alternately denies it and confirms his support for DACA recipients. How do we know what’s true?


I’m now following the daily newsletter of high-school student Gabe Fleisher, and I’m in good company—a lot of well-known political journalists also read “Wake Up to Politics” every morning. I’m hoping young Gabe can do what others can’t and get us the straight of the story.


Not a rant but a sad obituary: I know many of my friends disagree with my stand that we are being hasty in dismantling Civil War statues, but I am saddened by today’s removal of the General Robert E. Lee statue in Dallas. Fellow mystery author Janis Patterson put the case best here: https://ladiesofmystery.com/2017/09/14/privacy-responsibility-and-general-robert-e-lee/  Read it and weep, because I really believe we will come to regret this haste to change history, which cannot be changed. A GIF on Facebook also says it well: We will change nothing by taking down statues until we can change what’s in people’s hearts.
Posted by judyalter at 5:30 PM

Dr. Alter: as a daily reader of your blog (and conservative) I have to come to the conclusion that you should really step away from this anger and discourse which you are obviously enthralled in.

Yes, I know, you probably think I'm singling you out because you are an ardent liberal ( I bet you and I would agree on most things). When Obama was president I avoided fellows who did nothing but listen to Fox news and read all that conservative drivel. Those people became bores to me, and the anger after a little bit was exhausting, I learned to avoided them like the plague, their arguments became pointless and the clarity with which they saw issues was unpleasant.
With that in mind, I listen to sports radio, or just watched the news and drew my own conclusions. As I told my wife during the Obama years "I don't agree with a lot of the things he did, I however for one respected him as president of the United States".

Anonymous, if you think that post was angry, you should hear me at my best. I truly don't believe I wrote in anger--more in puzzlement. But I will not step away and watch sports shows (which bore me) and refrain from stating the things I think Americans need to be aware of--the DACA confusion, the tax bill, the dismantling of statues. Silence indicates acceptance, and I don't accept--I want to protest tax cuts for the rich when so many in our country are in poverty (trickle-down economics was disproven several presidencies ago), and, sorry, but I won't respect
the orange occupant of the White House just because he was elected president, perhaps illegally. I'm glad you read my blog, and I hope you'll continue to, but I will not change. Please sign your name next time.

Nah, I'm not signing my name, you yelled at me when I was younger....I kind of afraid of you...and not it wasn't just this post, it's the whole tone in your blog as of late. I guess I enjoyed hearing about your work, kids, grandkids or cooking. I kind of miss it.

My work goes well, my kids and grandkids are well, and I'm working on a new cookbook. I'll get back to all that. And, oh dear, I yelled at you? I like to think I never even yelled at my own kids. I apologize--or did you deserve it? Now I'm really curious.
I have a new novel, PIgface and the Perfect Dog--if you're in the Fort Worth area, please come to the signing party, Sept. 21, 5-7, Wine Haus, 1628 Park Place. I bet I'll recognize you but not identify you as the author of these comments.