The never-ending birthday celebration...and a glimpse of what makes Fort Worth so special 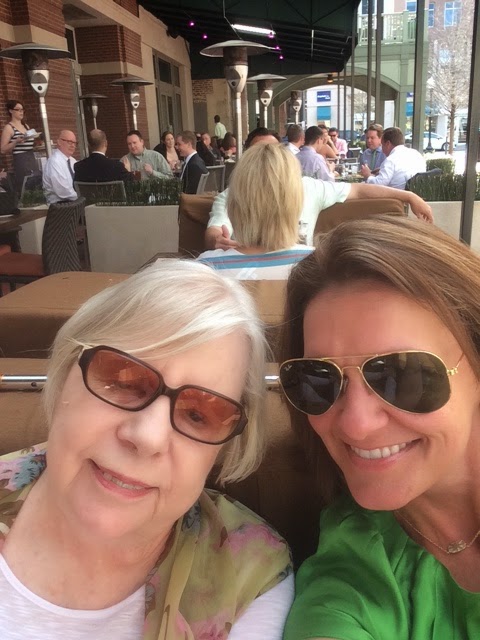 Today is Jordan's actual fortieth birthday, and we celebrated as we always do at a restaurant we both like. We went downtown over my protests about parking difficulties, long walk, etc. Jordan is so much smarter than I am. We parked at free valet parking a block from our destination, Del Frisco's Grille, and within minutes were settled on the patio which overlooks Sundance Square.
The specials of the day sounded heavenly but too rich and heavy. Jordan ordered salmon, and I split a deviled egg appetizer with her and then had a Caesar salad. The oh-so-nice waiter sent leftovers home with me, with extra dressing and anchovies. 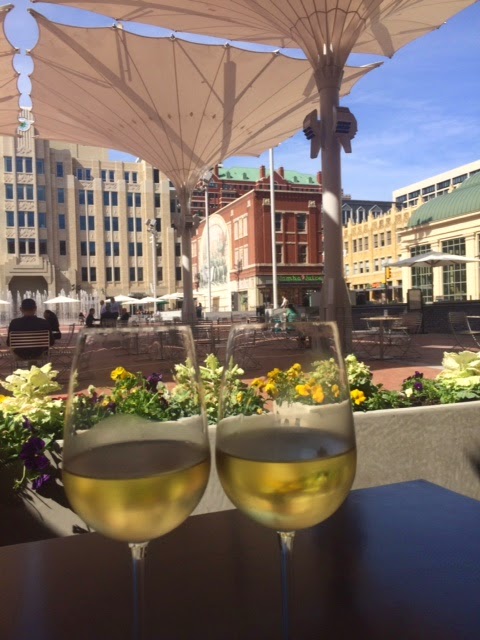 Of course, celebrating, we had wine, and Jordan took a picture of the wine glasses against a backdrop of Sunday Square. it is the most marvelous space--I'm probably really late to the party praising this development in the center of our downtown. But it's a bright and sunny oasis (with umbrellas for some shade), fountains, trees, brick paving. The contrast of old and new, both in the materials used in the square and the design of the buildings around it, is amazing and so sophisticated. Today we heard bagpipes playing in honor of St. Pat's Day but couldn't spot them. It's a wonderful, sunny day with the temperature just right for sitting outside in the shade. Neither of us could have been happier. 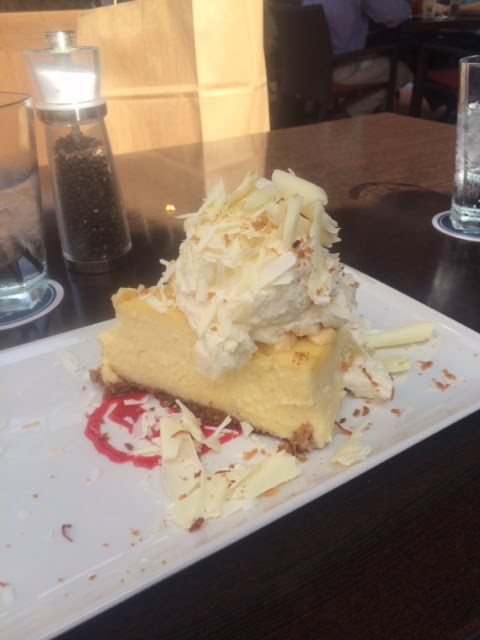 Jordan wanted dessert--which I balked at until it came. The waiter said the chef had made a special cheesecake with whipped cream topping and curls of white chocolate, set in a raspberry sauce. Turned out that dessert was complimentary to the birthday girl. Here it is, after we had both eaten as much as we could. It barely looks touched. Wonderful and good, but so rich and filling. Jacob and I can nibble on it tonight; then we'll send it home for Christian. Jacob will stay here tonight, and we'll have our usual Tuesday night dinner at the Grill. His parents are going on a romantic date to celebrate her birthday.
Two best parts of the day to me: lunch with my ever-charming, considerate, loving, gracious daughter on her fortieth--I still can't believe that, but she's optimistically looking forward to her forties, and I believe they'll be great.
The other great reminder for me was what a fascinating city we live in. Planners have worked hard to move Fort Worth into the twenty-first century, while preserving our historical heritage. The result is an eclectic, diverse city with something for everyone. I learned again that it's not that hard to go downtown, park and walk to any restaurant in the city. I learned that my city's core is accessible to all who want to share in the  fun and excitement.
One thing I notics: There were obviously many businessmen in the crowd that crossed the patio or milled around it or stopped to eat at one of several restaurants. But there were few suits and ties. We've come of age as one of Texas' casual, informal cities...but don't dismiss us lightly. We're powerful competition for any city our size.
Posted by judyalter at 11:47 AM