Late nights on the deck and the hairy puppet 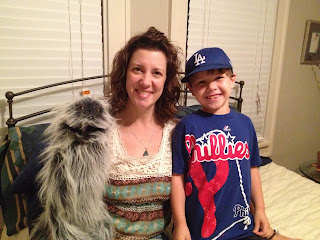 Taken at Elizabeth's going away party
Note Jacob's Phillies shirt, given him by Elizabeth
and the man she's leaving us to be with
﻿


Elizabeth and I have developed the habit of meeting on the deck for a glass of wine to end the day. It’s a time for reflection, deep thoughts, silly comments, and whatever. As the time for her move approaches, we find ourselves more often in deep thoughts—a whole new life for her, a big adjustment for me.


But Saturday night Jacob was with us, and we were all downright silly. In packing, Elizabeth had come across a hairy puppet she’d had for years. She gave it to Jacob. At first I thought it was just plain ugly, but that night when she began to make it talk and dance, I was enchanted. So was Jacob, who named it Harry. Sophie thought it was another dog and was less entranced—she went from curious to jealous (she did that last night too with Jordan’s two dogs here—I guess a second dog at my house is not a good idea). Elizabeth is really good at making Harry look and act like a character from Sesame Street, all in pantomime. Harry doesn’t talk.


We sat and laughed and giggled at Harry’s antics and stayed up far too late. Jacob went to bed at eleven-thirty, much to his parents’ dismay the next day. He said he likes to stay here because he gets to stay up so late. Not sure if that’s a gandmother’s privilege or my weakness. He asked if he could still have five minutes TV after he got in bed, and I said yes but when I went to turn it off he was already half asleep.


Jacob slept with Harry that night, but the next day Sophie still wasn’t reconciled to the puppet. If Jacob left it on the bed, she jumped up on the bed to get it. If he carried it around, she jumped at him. I’m glad to say that Harry has gone home to Jacob’s house. Much as I enjoyed his antics, I’d be glad if he didn’t visit too often.


But Harry will be part of Elizabeth’s legacy after a year of living in my garage apartment. She also leaves me a new fridge and a microwave in the apartment…but I’ll talk about her greatest gift tomorrow.
Posted by judyalter at 5:45 PM