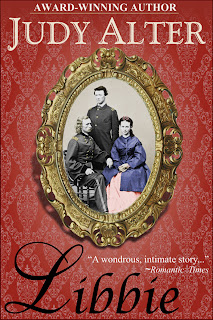 An author/friend once commented that having books out of print was like having children  you can't see. Well, I'm excited to announce that as of today I can see two of my OP "children" again. Libbie and Sundance, Butch and Me are now both available as ebooks. I've mentioned them before but in cases of blatant self promotion, I believe in repetition.
Libbie is the story of Elizabeth Bacon Custer's years with George Armstrong Custer, as I imagine them. Not all the fun and games her journals would suggest. Elmer Kelton wrote, "Libbie is probably the book Mrs. Custer would have written had she not been determined to protect her husband’s name.” a review in Romantic Times said, “A wondrous, intimate story of an unsung heroine of the West," and Affaire de Couer said, “Rings…authentically true….Brilliant and memorable….Kudos to Ms. Alter for a refreshingly unique story.” Here's a brief excerpt:


I knew that history would make a plaything of Autie, and when that happened, all my battles would be lost again. Autie rarely lost a battle—save that last big one—and his fights were always glorious, painted on a broad screen by the clamoring newsmen if not by himself. My battles were small and silent and private, but oh! they were important to me, and I had managed to hold the line. I would not see it all wiped away with the muckraking cry that Autie's overweening ambition had led him to disaster at Little Bighorn. I would make sure that the world saw the George Armstrong Custer I wanted seen. Only this private journal—to be burned upon my death—records my own wars.


Twelve years is not very long in a lifetime, yet it seemed my whole life was lived in those brief years of marriage. I had fought battles of my own, hard battles, to marry Autie, and once married, I thought myself the happiest and luckiest of women—married to the great boy-general, the hero of the Civil War. We would, I knew, grow old together, savoring the best of life, the last for which the first was made, so the poet wrote. I'm not sure when, exactly, that I knew that dream was not to be, that a love as intense as ours could not survive, that two people as willful as we could not be bound so tightly together. And yet, when all was said and done, I would not have traded those twelve years for anything on earth. Were they worth a lifetime? There is no answer, but even to think about it, I must begin earlier, back in Monroe.... I remember yet one snowy night when I was but sixteen years old.
http://www.amazon.com/Libbie-Historical-Western-Romance-ebook/dp/B007Q3EJ74/ref=sr_1_3?s=digital-text&ie=UTF8&qid=1333417391&sr=1-3  and from Nook at
http://www.barnesandnoble.com/w/books/1000340594?ean=2940014178730&itm=1&usri=judy+alter+libbie
Posted by judyalter at 6:56 PM