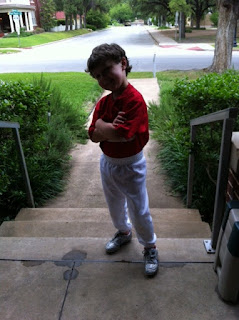 Watch out, Texas Rangers. In a few  years, here comes Jacob Burton! I went to his baseball game today. Peewee Baseball is for a long time an exercise in watching strike-outs, but when Jacob came to bat, the bases were loaded. I was afraid he's strike out and blow the chance, but he nailed it and made it all the way to second--tagged out on his way to third and so disappointed. He wanted to score. We couldn't convince him that his hit enabled his team to score the two points that gave them a winning game (2-0). I kept asking how many innings they played and was told, "They play an hour." Apparently, the cut off the game after an hour, though they play out that inning. Today it was five innings. 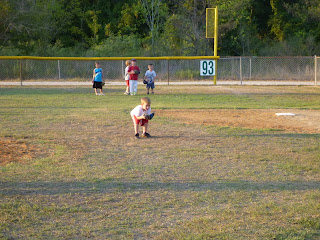 Kegan, the youngest of all my grandchildren and a Houston resident, plays a mean baseball game--look at that stance above. He's a bit small for his age but makes up for it in fierce determination. He plays soccer too, and I have a wonderful picture of him. This is Kegan on the soccer field. I love the sort of scowl on his face--this sweet boy turns into a tiger for sports. Normally his fine, blonde hair lies flat to his head but for soccer  his parents oil and spray it into a Mohawk. 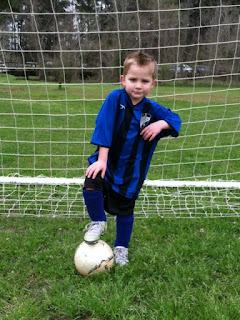 Jacob appeared one day with the messiest mop of curls I'd ever seen. Wondering why his mom had let him out the door that way, I tried to smooth the mess. "Juju! That's my Mohawk." He'd just been with Kegan.
Sawyer and Ford, my Austin boys, both play soccer and swim like fishes, but I have no pictures and Megan couldn't supply them today. I wonder if they're all going to take after my grown boys, both of whom are now dedicated to triathlons. Even Lisa has the bug, and today her ex-sister-in-law ran a marathon in Atlanta. The exercise bug is catching. I'll stick with  yoga, thank you.
I admit I'm an unabashed sentimentalist--and also hooked on the Food Channel's Restaurant Impossible, where Robert Irvine has two days and $10,000 to turn a failing restaurant into a success. Tonight when I watched a couple open their eyes and see their redecorated restaurant for the first time, I teared up. A part of me always wishes I'd gone the chef/restauarant route when I was younger, much as I like being a writer.
Tonight the air is still. The leaves of my elm tree barely move, and the bugs were after me. I didn't spend long on the porch. But it's still a lovely night.
Posted by judyalter at 5:46 PM